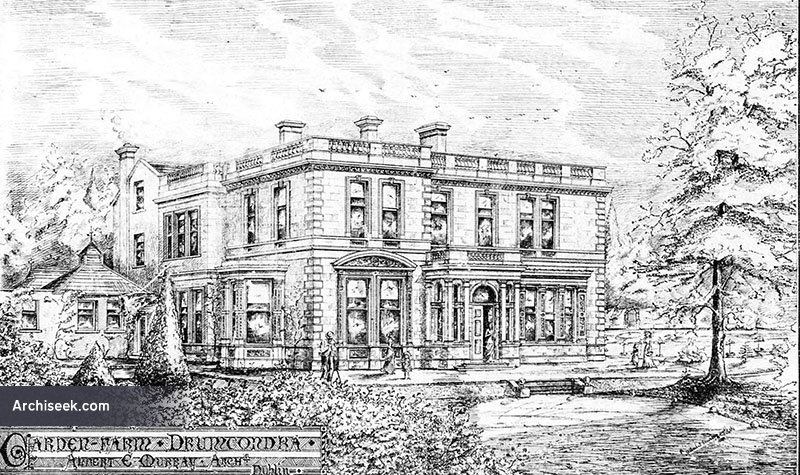 Constructed as a large villa, now subsumed into the Dublin Regency Hotel.

“Recently built on a beautiful site in our northern suburb, Drumcondra, commanding a view not only of the entire city, but of the range of Dublin and Wicklow Mountains and the Bay. Externally, Portland stone has been largely used – porch, bay windows, and window dressings being of that material. The general arrangement of plan is most satisfactory, comprising on ground floor four reception rooms, servants’ hall, pantries lavatories, kitchen, &c., the latter being quite outside main building. Main staircase is in a large square inner hall which runs entire height of house, lighted from top and communicated with gallery leading to bedrooms. There is also a backstairs to nurseries, &c., and servants’ apartments. The whole house has been fitted up with all the necessary modern improvements, vix., electric bells, lavatories, bath-rooms, &c., and fire main; halls and passages being heated with hot water. The entire was carried out from the designs and under the superintendence of Mr. Albert E. Murray, FRIAI, architect, general contractors being Messrs. Fitzpatrick Brothers of Belfast. The plumbing, heating, bells, &c., were done by Mr. William Baird of Lower Abbey-street. The out-offices are extensive and have also been carried out from Mr. Murray’s designs and under his superintendence since completion of above.” The Irish Builder, April 15 1883.