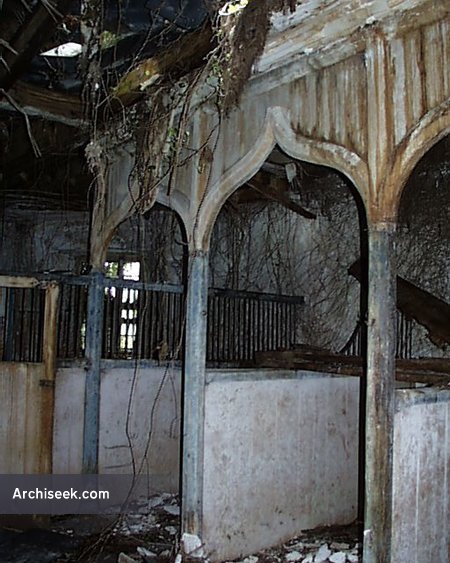 An Taisce has created a list of what it considers to be the most significant Buildings at Risk in Ireland. Amongst the criteria used to form the list: significance including interiors with important decorative features; and buildings which if left to deteriorate further would be damaged or compromised in their features and integrity. This latter consideration would include many properties “collected” during the boom for future developments, many of which will probably never now happen.

Among those listed are Belcamp, a fire damaged, late 18th century house with significant plaster decoration and chapel from which set of Harry Clarke windows have been removed for safety; and Carriglass Manor where the gates, stables and farmyard were designed by James Gandon with later Tudor Revival house, left empty after failure of recent development.

Illustrated above, is the early 19th century Gothic stables, designed by Sir Francis Johnson, are falling into roofless ruin, at Charleville Castle in Co. Offaly.