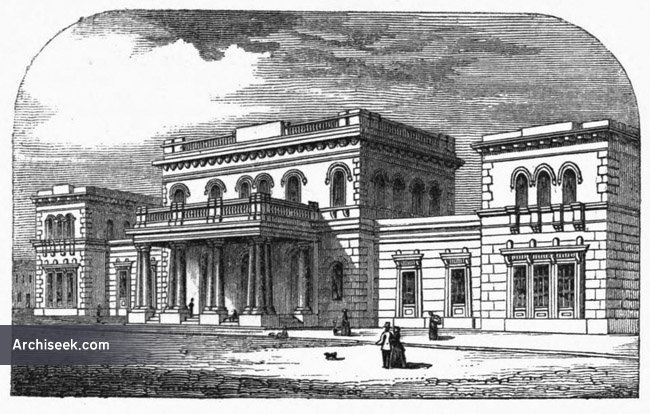 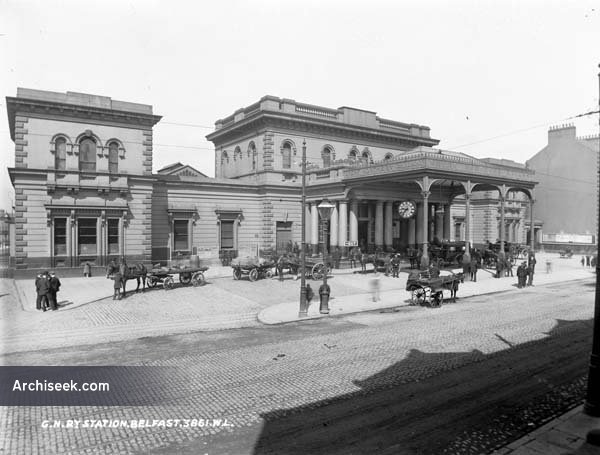 The Ulster Railway opened Belfast’s first railway terminus in 1839, and as such was called just “Belfast” until 1852. By 1852 the Dublin and Belfast Junction Railway was completed, making it the terminus for the most important main line in Ireland. The Ulster Railway had added a new station building in 1848 to designs by John Godwin, replacing the original station by Thomas J. Woodhouse. In 1876 the Ulster Railway became part of the Great Northern Railway, making Great Victoria Street the terminus for a network that extended south to Dublin and west to Derry and Bundoran. Sadly, in the early 1970s Northern Ireland Railways closed both Great Victoria Street and the Belfast Queen’s Quay terminus of the Bangor line and replaced them with a new Belfast Central station. The station buildings were demolished and the Europa Hotel and the Great Northern Tower built in its place. For many years, part of the railway shed remained, in use as a bus station, before being demolished.

Described in Tours in Ulster a hand-book to the antiquities and scenery of the north of Ireland., published in 1854.”….a massive building, -with a portico and two wings. Although of no particular style, it is very ornamental, and forms a leading feature in this highly fashionable and rising locality. There is a spacious station-house in the rere, with every accommodation usual upon the best railways, and well adapted to the prospective traffic of this great line.”