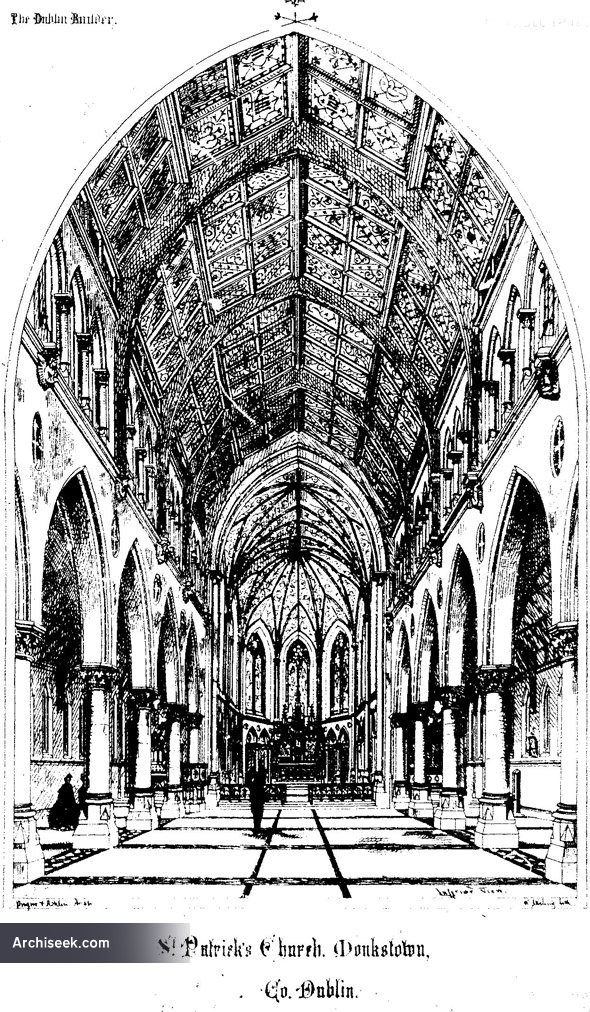 From the Dublin-based magazine the “Dublin Builder” of 1st September 1865, “This church, which is at present in course of erection is in the French Pointed style. Exclusive of sacristies &c., it is 180ft in length by 60ft in width. The principal view of the building, obtained from the Dublin Road is the western front which has been made as effective as possible on this account. The tower which stands at the S.Q. angle has been somewhat detached from the nave wall to give greater width. The baptistry occupies the opposite angle and has an apsidal termination projecting from the lines of the aisle walls. The entire breadth of this front is nearly 80ft. There are two doorways in the west galble, between which will stand a statue of the patron saint. These are surrounded by an arcade of five arches, supported on Aberdeen Granite columning over which there is a rose window. The whole is enclosed by a lofty arch rising from the ground. The clerestory windows are arranged internally in the form of a continuous arcade resting on red sandstone columns. The other internal features will be sufficiently explained by the accompanying view. The cost exclusive of spire will be about £6,000. The architects are Messrs. Pugin and Ashlin. Mr. Meade of Great Brunswick Street is the builder.”