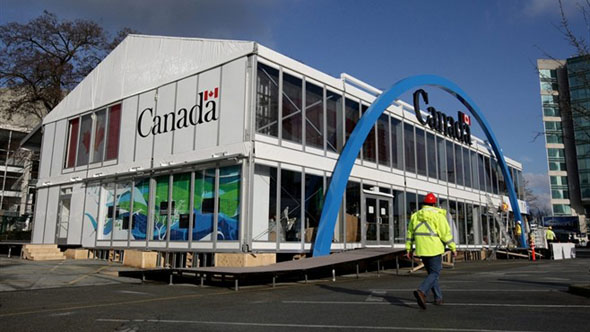 While Ontario, Quebec and Alberta put the finishing touches to Olympic pavilions designed with flair and distinction, the host country is preparing to welcome the world in a structure that is little more than a large, white, square-boxed tent.

And some of Canada’s foremost architects are appalled.

“Something happened. It’s embarrassing,” Bing Thom, recipient of numerous awards and a member of the Order of Canada, said yesterday.

“This is a world event. As Canadians, we all want to put on a good show, and architecture can help. But from the outside, this pavilion is completely uninspiring.”

The Royal Architectural Institute of Canada, meanwhile, is so upset by the process and end result, that its executive intends to express its concern directly to the government.

“This is a missed opportunity for Canada to demonstrate to the world what the country represents,” said Vancouver architect Wayne De Angelis, regional director of the institute. “If we are going to be represented by just a white box that looks like something you can buy online, that’s fine, but other pavilions are doing much more than that. It’s sad.”

Mr. De Angelis said there should have been at least some sort of design competition to give Canadian architects time and a chance to shine.