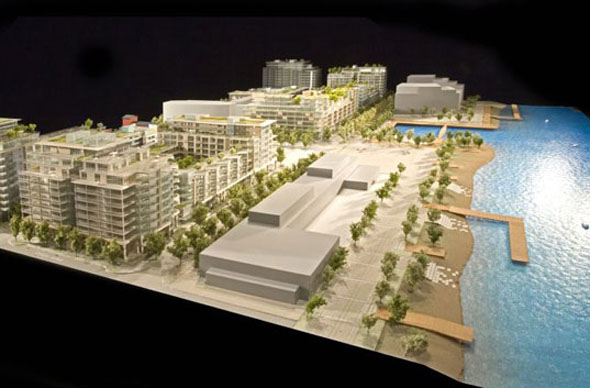 To openly admire the Olympic Village is a risky business. Heaping praise on a large-scale development lacks the appropriate Canadian reticence. You can already hear the chorus: From behind their masks, they hail as disingenuous any positive evaluation of a project built during the economic collapse and requiring a $700-million bailout of a developer by a city. More than that, we don’t do new urban neighbourhoods well in this country, so surely this one, on the shores of Southeast False Creek in Vancouver, warrants the typical lashing. But when I saw it from across the creek, and then up close, what became clear to me was this: The Olympic Village is a serious urban accomplishment.

Optimists, be warned: Southeast False Creek, currently a heavily guarded Pleasantville for some 3,000 athletes, will not cure the woes of the Downtown Eastside. Neither will SFU Woodward’s, an inspired collision of mixed-use buildings, public atriums and social programs. Southeast False Creek – simply known these days as the Olympic and Paralympic Village – cannot take responsibility for an entire city. But, as a city-owned, 50-acre (20-hectare) neighbourhood, it represents a new set of aspirations and an inspired template. It will do for Vancouver what the St. Lawrence neighbourhood did for Toronto in the 1970s – catapult the city as a test zone of urban daring.

In draft form – originally imagined by former Vancouver planner Larry Beasley – the new, high-density development of 1,000 residential units seemed merely a dreamscape. Planners and architects in Vancouver had become consumed by the holy trinity: glass-point towers blessed with a street-level base building and a sacred view cone to the mountains. But with the athlete’s village – an eight-city-block waterfront site cursed, apparently, by a lousy location and mediocre views to the mountains – Vancouver has scored big-time. The neighbourhood accommodates a dramatic mix of incomes. There’s a building specifically designated for the elderly, and several for startup families. What’s been built includes deep sustainability: urban agriculture on 50 per cent of the rooftops, and heating from a highly sophisticated district energy centre.