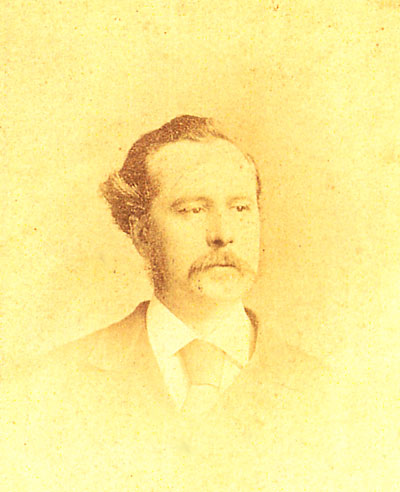 The founder of the Pugin & Pugin practice was Edward Welby Pugin, born in London on 11 March 1834, eldest son of Augustus Welby Northmore Pugin and his second wife Louisa Burton. He was brought up in his father’s office and was ‘his right hand man’ by the age of sixteen, keeping the practice going through his father’s periodic fits of madness from February 1852 onwards. When his father died on 14 September of that year he was eighteen. The sole beneficiary of his father’s will was his third wife, Jane Knill, and on the advice of the stained-glass manufacturer John Hardman Powell who had married Pugin’s eldest daughter Anne, Jane Pugin moved both household and practice to Birmingham partly to be near their main patron the 17th Earl of Shrewsbury.

For the Earl, Edward revised his father’s designs very much in his father’s style, but in 1856 the Earl died. The Pugin family resettled in Gordon Square, London, in the same year becoming sufficiently prosperous to resume full occupation of the Grange at Ramsgate by 1861. In 1856 Edward succeeded in having himself appointed an additional assessor in the Lille Cathedral competition. Thereafter he began working in an individualistic French and Flemish gothic, often with strong polychromatic effects. His practice expanded rapidly and to cope with it he set up an additional office in Liverpool and formed a partnership with the Irishman James Murray in 1857, who had already been in practice there. In 1860 he formed a second partnership with his brother-in-law George Coppinger Ashlin and opened a Dublin office for Irish work. The Murray partnership was, however, dissolved in 1860, Murray thereafter practising on his own account until his early death; and in 1862 Edward merged his practice with that of the older and well-established Joseph Aloysius Hansom. That partnership closed acrimoniously in the following year.

Edward Pugin was admitted FRIBA on 16 June 1862. Two years earlier in 1860 he had founded the South East Furniture Company to manufacture his designs, the management of it being largely in the hands of his brother Cuthbert. The break-up of his partnership with Ashlin in 1869 may have been related to a much more high-risk business venture, the Granville Hotel at Ramsgate, a vast hotel and hydropathic complex. This failed in 1873 leaving Pugin bankrupt with liabilities of £187,000. He left for the United States where he quickly obtained commissions for some thirty churches and a monastery in Cuba. The English and Scottish work in hand was continued by his brothers Cuthbert Welby Pugin, born to Louisa in 1840, and Peter Paul Pugin, born in 1851 to his father’s third wife Jane Knill, both of whom had been assisting him since the 1860s and had recently been taken into partnership, the practice becoming Pugin & Pugin.

Edward Pugin died suddenly on 5 June 1875 as a result of overwork and ‘injudicious use of chloral hydrate’. He was unmarried and the main responsibility for the practice passed to his brother Peter Paul