Can you help the Rossmore Conservation Group? 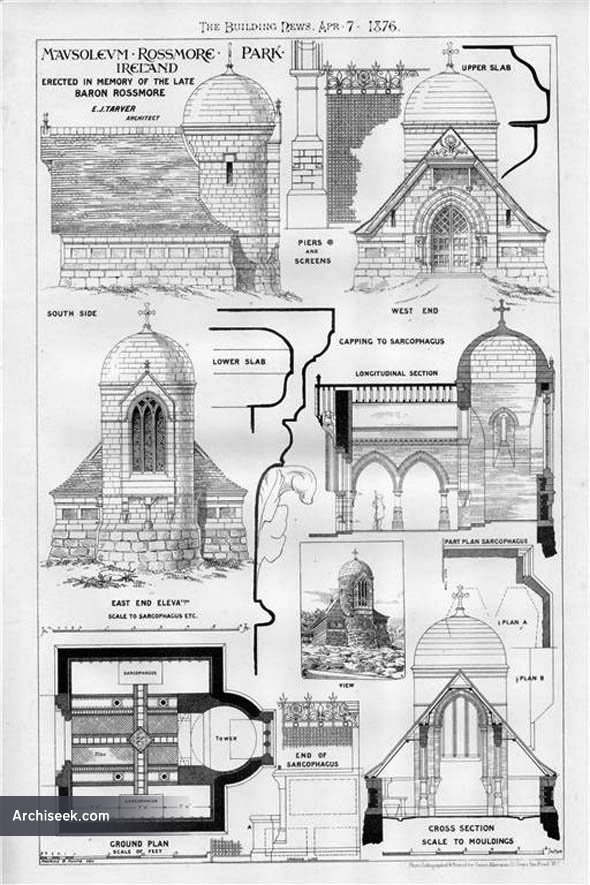 2008 was a good year for the future prospects of a fine mausoleum, hidden in Brown’s Wood in the midst of Rossmore Forest Park, Monaghan. The establishment of the Rossmore Conservation Group and successful fundraising and awareness building, enabled phase 1 of conservation works to be undertaken. The Mausoleum was built in 1874 by Derrick Warner William Westenra, the fifth Lord Rossmore for his brother Henry Cairns Westenra, who died following a fall from his horse at the Calvary Barracks, Windsor on 27th March 1974. He was 22 years old.

It was designed by Edward John Tarver (1841-1891), a respected English architect and architectural historian. He was the President of the Architectural Association in 1874 when the building was commissioned. The building is a single-cell mausoleum with a pitched roof and limestone domed roof rising to the northern end of the mausoleum. Situated on a picturesque site, close to a waterfall, the site is enclosed by a limestone wall, with decorative railings.

Tarver’s design for the mausoleum was featured in The Building News in April 1876. Drawings of the elevations, ground plan, various mouldings, piers and screens were included. It’s a fine record of the building. However, no detail of the stained glass windows on the tower or chancel were included.

The Rossmore Conservation Group is seeking information on the original design of the windows on the tower. A few fragments of glass remain, but very little else. In 2008, the terracotta tiled roof was successfully repaired and the dome re-pointed. The group is intending to include the restoration of the windows in the next phase of work. Any information or pointers that could be provided would be a great help. Information can be prodided to the Heritage Officer, Monaghan County Council, The Glen, Monaghan. Phone: 047 73722