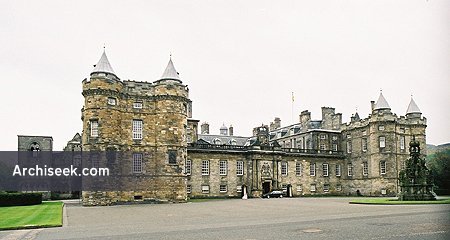 At the opposite end of the Royal Mile from the Castle, Holyrood Palace is built beside the earlier Holyrood Abbey where Kings of Scotland were crowned. The abbey, the remains of which can still be seen (to the left of the Palace) was built by King David I in 1128. Much altered over the centuries, reroofing in 1758 with stone slab caused the vaulting to collapse ten years later. The abbey has been a ruin ever since.

In the 15th century, the Abbot’s guest house became used by the Kings of Scotland as their Edinburgh residence in prefernce to the castle which was deemed uncomfortable. In the 16th century it became the main Royal residence with the abbey becoming the Chapel Royal.

The Palace as we see it today, is a product of the late 17th century. It was rebuilt as a Viceregal Residence to the design of Sir William Bruce. It was executed by Robert Mylne who was the King’s Master Builder. Retaining the north-western tower of 1529, Bruce linked a similar new tower at the north-east with an elaborate screen wall and triumphant entrance. Behind the screen wall is a U-plan palace in the classical tradition with a ground level arcade. Similarly, the ruins of the Abbey were balanced with a kitchen block designed to look like part of the original abbey buildings.

The Palace has two eleborate gateways, one to the bottom of the Royal Mile and another leading towards Arthur’s Seat. Still in use today, the Palace is open to the public.