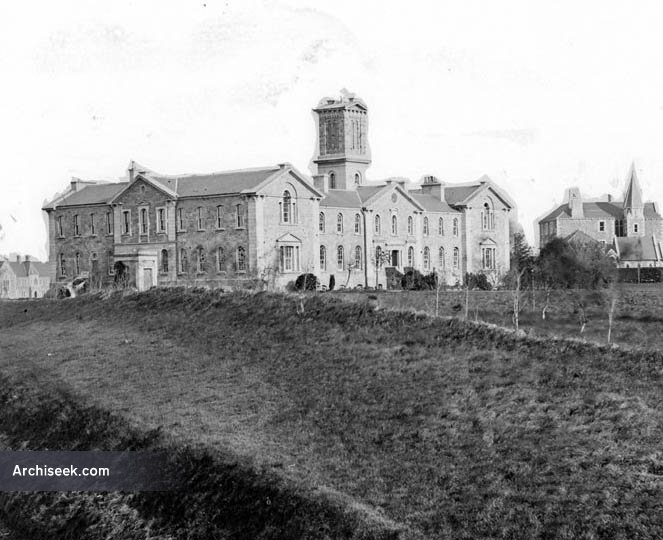 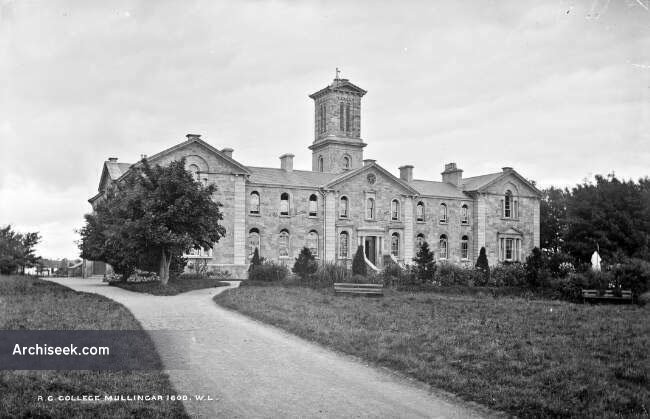 Now known as Coláiste Mhuire or CBS Mullingar. “It has been built and endowed by a bequest made by the late Mr. James Hevey. It forms three sides of a quadrangle, and extends about 160 feet in front, and 100 feet on each flank. The entire exterior surface is faced with wrought limestone of the district, the cornices and dressings being of Tullamore limestone. The central portion contains, in the basement, culinary, offices, store-rooms, &c.; the principal floor contains the entrance-hall, principal stairs, corridor, waiting-rooms, refectory, and library; the upper story contains the sleeping apartments, oratory, &c., for eight of the community of the “Christian Brothers’, under whose charge one department of the establishment is placed. One wing contains four schools, 40 feet by 24 feet, and 16 feet high, with stairs, &c.; 450 pupils are already in daily attendance at this department, under the care of the Christian Brothers. The other wing contains large study-hall for classical and mathematical students, together with suitable dwelling for the teachers, and refectory, dormitory, &c. &c., for ten pupils, who will be selected for proficiency, and maintained on the establishment. The front of the building is furnished with three large projections, finished with pediments, and inclosing large Venetian windows. Similar projections, with entrance-porches, are placed in the centre of each flank. The front of the building is surmounted by an open campanile, 80 feet in height. The cost of erection has been about £6,500.” The Freeman’s Journal