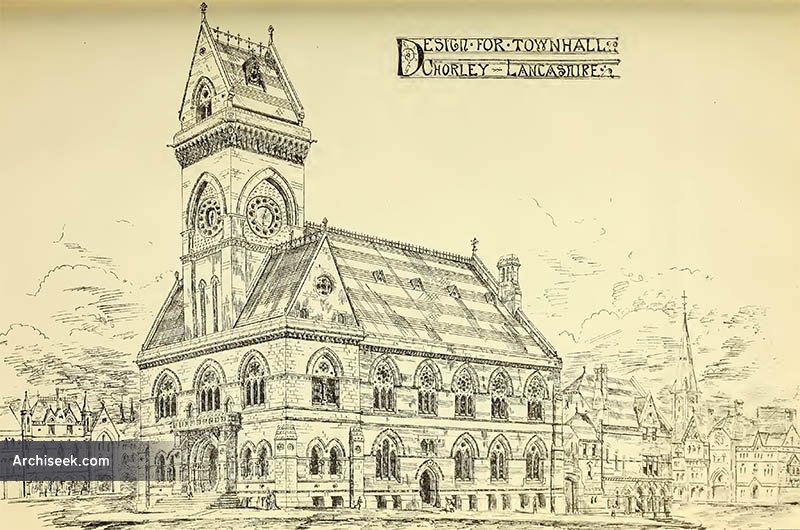 Unsuccessful competition design by Dublin architect J.L. Robinson for a town hall in Lancashire. At the time of the competition, there was some concern amongst architects about the size of the budget that was allowed.

“Our illustration with present number is lithographed from a design submitted by Mr. J. L. Robinson, of this city, for the above named building. There were no. less than sixty-three sets of designs sent in to the Commissioners in competition.

After considerable discussion on their merits, the entire matter was referred to Mr. Edward G. Paley, architect, Lancaster, who in his report observed that — The sum named (£10,000) in the “instructions to architects ” is quite insufficient to cover an area of more than 15,000 yards, with substantial, well-constructed buildings, such as the Commissioners might be expected to erect for the town of Chorley. It is to be regretted that the intending competitors did not try to get this sum increased 50 per cent., which, in my opinion, would have been the minimum required for buildings of this character and purpose. Hail it been possible to erect the buildings for the amount named in the instructions, I should have limited my attention only to those plans that had kept within the prescribed sum, as not one of them, however, (with any claim to be considered) can, in my opinion, be carried into execution for the sum named, this most important condition as to excessive cost cannot lie so used. In selecting the three best plans, I Dave carefully kept in view that the award should be given, not to the finest architectural design and composition, but to tile plan that shows the best appropriation of the ground, combined with a most suitable elevation, in fact, the competitors who have best studied the ground and followed moat closely the instructions.

Many of the designs are cleverly planned, andmshow great talent as architectural compositions,mbut could not be built for three times the sum named.” The Irish Builder