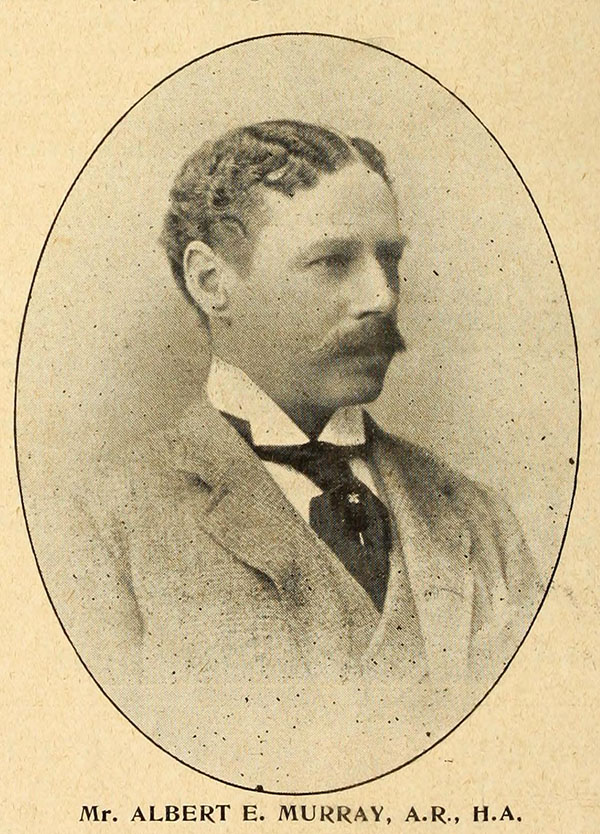 The subject of our interview comes of an architectural stock. For three generations, the Murrays — father, son, and grandson — have been well-known Irish architects, The Murrays are a County Armagh family of Scottish origin, settlers of the Ulster Plantation. The original colonists were descended from a Colonel Murray, of Philipshaugh, on the Scottish border, of the Clan Athol, the head of which is the Duke of Athol. During the revolution of 1688, a Colonel Murray figured prominently in the seige of Derry, fighting on the side of the defenders. He became possessed of a sword, which is described as “ the ‘Derry Sword,” and this sword was in the possession of Mrs. Francis Johnson, widow of the architect, at the time of her death.

William Murray, grandfather of Mr. Albert Murray, was the first architect of the family, and a first cousin of Francis Johnson, a famous architect of the last century, founder and, first President of the Royal Hibernian Academy. Johnson was a native of the City of Armagh, and a protege of the Primate of the day, who, struck with his talent, took him up at an early age, and sent him to Dublin in 1778, when he became a pupil of Cooley, his Grace’s architect, renowned as the designer of the Royal – Exchange, now the City Hall. He employed Johnson to superintend the Linen Hall, then in course of erection. Subsequently’, Johnson went to one Samuel Sproule, architect to the Wide Streets Commissioners, who seems to have succeeded Cooley as architect to the Primate. Sproule died in 1784, and on his demise the Primate appointed Johnson ,his successor.

The Archbishop appears to have been a staunch patron, for one of the earliest commissions Johnson received was to prepare designs for raising the tower and adding a spire to Armagh Cathedral. Owing to the foundations proving defective, the project was, in part, abandoned, and was limited to adding a stage to the existing tower.

Amongst the earlier works of Johnson was the Mansion House of Bakeby, near Marlay, in the County of Louth. Later on he designed and superintended the Roman Catholic Cathedral at Drogheda, the tower and spire of St. Peter’s Church, and other works in the same town. St. Peter’s tower is a very good work of the period, and the church boasts a wonderfully fine set of old church plate. In 1790 Johnson married a Miss Barnes, of Armagh. Townley Hall, near Mellifont Abbey, the fine seat of the Balfour family, followed in 1793. In the same year w$ find him employed at Slane Castle, the seat of the Marquis of Conyngham ; at Kileen Cattle, for the Earl of Fingal ; Dangan Castle, for Colonel Barnes, and Fort Weston House, the seat of Dean Dawson; Ballingall, the seat of the Gibbons family; Charleville Castle, for the Earl of Charleville ; while in Dublin he carried out additions to the Foundling Hospital (now the South Dublin Workhouse), and alterations to the Royal Hospital, Kilmainham. In 1800, the year of the Union, he designed his best and most famous work — St. George’s Church, a building somewhat in the manner of Wrenn’s city churches, but showing the impress of the Greek revival, which, before the completion and opening of St. George’s, in 1814, had begun to exercise a marked influence on the work of the day. It is one of the most graceful of Irish churches, the steeple being of singularly elegant pro- portions, and is said to have cost ,£90,000. In 1807 Francis Johnson had been appointed architect to the Board of Works, and in 1814 — the year of the opening of St. George’s — he was architect of the Chapel Royal, in the lower Castle Yard, a church of, the perpendicular period; of excellent proportions, and when one remembers the date of its erection, the character of the detail must be pronounced wonderfully good. Johnson also de-igned St. Andrew’s Church (the old “Round Church,” which was burnt down some thirty-five years ago, and replaced by the present beautiful Gothic church, designed by Mr. W. H. Lynn, R.H.A., Belfast). In 1818, the General Post Office, in Sackville-street, a large and imposing classical structure, designed by Johnson, was opened, and amongst other of his official works may be noted the Gate at Watling-street, the Richmond Bridewell, at Harold’s Cross (now Wellington Barracks), the Richmond Lunatic Asylum, and several provincial asylums. Johnson died on 14th March, 1829. He founded and endowed the Royal Hibernian Academy, designed and J erected the Academy House, which he presented as a gift, free of rent for ever, the whole cost being about ,£11,000. He was elected first President of the Academy. His widow ‘ subsequently, at her own cost, added a Statue Gallery’ to the Academy House. Although so able an exponent of the renaissance art of his day, Johnson, strange to say, never visited the Continent, though he was often in England. He was buried in old St. George’s churchyard, where a memorial to his memory is still in existence.

William Murray, the elder, was associated with his distinguished cousin, Johnson, becoming his partner in 1819, and on his death, succeeding him as architect to the Irish Board of Works. He completed nine lunatic asylums from Johnson’s designs. He did some work at the Bank of Ireland, probably Operations in contraction with its change from Houses of Parliament to a banking office; and, he was also connected with Christ’s Hospital (Bluecoat School), Dublin. He designed Ball’s Bank, in Henry- street, Dublin ; Castle Dillon ; alterations to Carton for the Duke of Leinster ; work for Lord Castlemaine, the Earl of Charlemont, etc. He carried out alterations to old St. Catherine’s Church, Dublin ; designed old Connaught House for the first Lord Plunkett, the great orator and vigorous opponent of the Union, who, nevertheless, afterwards took office as Lord Chief Justice of Ireland; work at Malahide Castle, for the Lord Talbot de Malahide ; work for Lord Meath ; alterations to Sir Patrick Dun’s Hospital, the Royal Exchange, the Marshalsea, and the King’s Inns. He was architect to the Great Southern and Western, and the old Dublin and Drogheda Railways in their early days, and designed most of the early railway stations. He designed Gresham Terrace, Kingstown ; while amongst the asylums built from his designs may be mentioned Armagh and Dublin, and the “Houses of Industry,” Dublin. He is supposed to have designed the fine Courthouse and the County Gaol at Tullamore.

The work which, however, will probably best cause him to be remembered is the College of Surgeons, in Stephen’s Green, Dublin, a fine, dignified work, which has lately been illustrated in the Irish section of that splendid publication, Georgian Architecture,” recently issued in eight volumes by The American Architect , lately reviewed and illustrated in our columns. He died in 1849.

His son, William George Murray, R.H.A., succeeded to his father’s connection, and, like him, enjoyed an extensive practice. He was architect to the Union Bank, the Ulster Bank, and the Provincial Bank; for the latter he built about twenty branch offices. He was responsible for the Gate Lodges in the Phoenix Park ; he likewise designed Breslin’s Royal Marine Hotel, at Bray ; Messrs. Gilbey’s head offices, in Sackville-street ; the Standard Assurance offices, in the same street; the Scottish Equitable; the Old Men’s Asylum, at Leeson Park; Waterford Railway Station; and, like his father, he was architect to the Great Southern and Western, and the Great Northern Railway Companies, etc. ; designed the Royal College of Physicians in Kildare-street, the foundation stone of which was laid in 1862 by His Excellency Lord Carlisle, etc. William George Murray died in 1871.

Mr. Albert Edward Murray was apprenticed to his father in 1866, and succeeded to his practice. He spent some time in the office of the late W. McCurdy, President of the Institute of Architects in Ireland. He was also a pupil of the Dublin School of Art, where he succeeded in winning several bronze and silver medals. Later, he was in partnership with the late George Henderson for five years. Amongst the works carried out from his designs are : — The new wing to the Rotunda Hospital (the oldest, and still the largest and most famous maternity hospital in Europe, built out of his private purse by the famous philanthropist, Dr. Moss, in the eighteenth century); the new Royal City of Dublin Hospital ; rebuilt the old Leper Hospital at Waterford ; built a house for T. A. Anderson, Esq. at Waterford; Alms House, at Thurles (“ Dame Stannix’ Charity”); Garden Farm, Drumcondra, for Robert Paul, Esq. ; Castle on the Island at Waterford ; is architect by appointment to the Royal City of Dublin Hospital, and to the Royal College of Physicians, Ireland ; designed the Theatre of the Incorporated Law Society at the F our Courts, Dublin (competition) ; several extensive “ Makings ” ; additions to the Adelaide Hospital, Dublin. Amongst the works which he has at present in hand are a large warehouse in Dawson-street, for Messrs. David Drummond and Sons ; Nurses’ Home and new Theatre for the Adelaide Hospital; Nurses’ Home, Royal City of Dublin Hospital, and extensive alterations and additions to the Coombe Hospital ; the Lismore Fever Hospital; Enniskillen Infirmary, and the Boys’ Home, Lord Edward-street, Dublin. On the occasion of the visit to Dublin of Her late Majesty Queen Victoria, Mr. Murray was responsible for the laying out of the exceedingly effective decorations of Sackville-street, and also of Clyde-road, of which he is a resident ; for many years Examiner in State Medicine in the Royal College of Physicians, Ireland. A large practice in domestic work.

Mr. Murray joined the Institute of Architects of Ireland in 1867, of which body fie is now a Fellow, and was, for 17^ years, hon. sec., and, for 13 years, lion, treas. When Mr. Murray became secretary, the fortunes of the Institute were at a low ebb, and the greatest difficulty was experienced in inducing architects to join — funds were practically non- existent — and although he was instrumental in reducing the subscription during his tenure of office, he succeeded in placing to the credit of the Institute, accumulated funds to the extent of nearly ^500. Now there is a general desire to join, and whereas the membership was formerly .only 20 or 25, the Institute now boasts nearly 100 members, and has affiliated to it a healthy young society in Belfast. While secretary, Mr. Murray was always zealous in furthering the material interests of the Society, and preventing, as far as possible, the recognition of unqualified persons. For a period of 15 years the Institute had its head quarters in his offices, he also providing all clerical help gratis. As might be expected, Mr. Murray also paid attention to the social aspect of the Institute’s functions, and inaugurated the very pleasant and sociable annual dinners, which have done so much to bring Irish architects in touch with one another.

The dinners were at first limited to members of council, but were afterwards open to the members, of whom about 20 were present at the first dinner, while on the last occasion 80 sat down to dinner. Mr. Murray is a Fellow of the Royal Institute of British Architects, an Associate of the Royal Hibernian Academy, and a Member of the London Architectural Association. He is one of the oldest and most regular supporters of those pleasant annual excursions organised by that body. He is also a Member of the Irish Architectural Association, and occupied the chair at the meeting which inaugurated the very successful revival of that Society, in 1896. Socially, he is well known and popular in Dublin, and is an enthusiastic golfer.