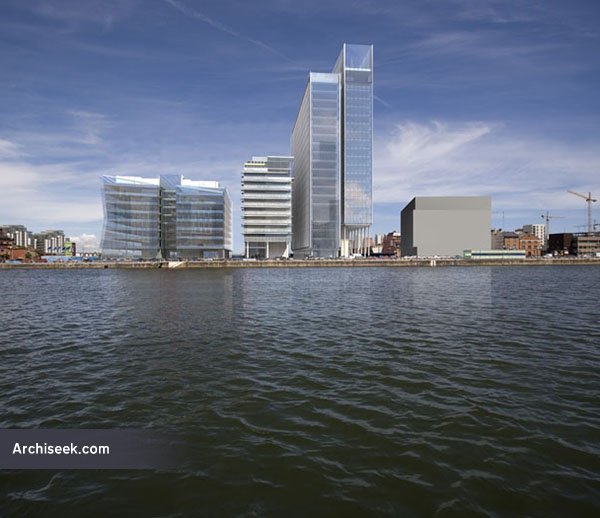 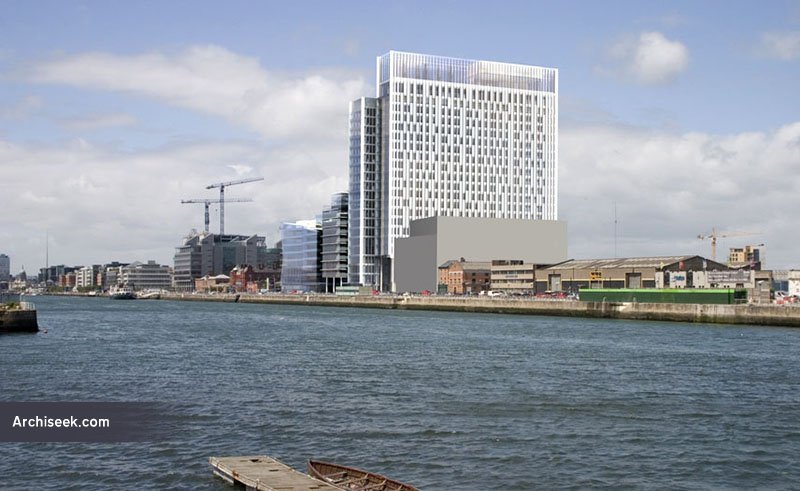 According to the architects “Conceptually, the towers originate from a single block ‘split by tectonic forces’ which open up a central ‘crystalline’ chasm. One tower is then drawn towards the River Liffey to the south, and the other towards a new canal to the north. A further shift in the vertical plane elevates the east tower by four storeys, defining a north south connection through the site. This is counterpointed by a generously proportioned void space at the summit. The relationship between these two elements, each wrapped in a glazed screen, provides focus towards both the city and the river, creating a civic engagement with the immediate and wider context.

Accessed from North Wall Quay, the entrance is formed by a 4-storey high colonnade. This space is enlivened by a blade of glazed lifts and reinforces the adjacent linear park which connects to the Liffey. Beyond is a flowing sequence of spaces, moving from reception area, foyer space and through to a river-front café. Basement car parking has direct lift access to the reception lobby and upper floors, including a double-height staff canteen.
Typical office floor space provides bright, efficient, adaptable space for a variety of the client’s ongoing requirements. The structural layout provides column-free floor plates and the central crystalline chasm is top lit.”

A successful High Court legal action was brought against Dublin Docklands Development Corporation resulting in the 40,000m2 AIB HQ being cancelled as it was about to go to construction phase.