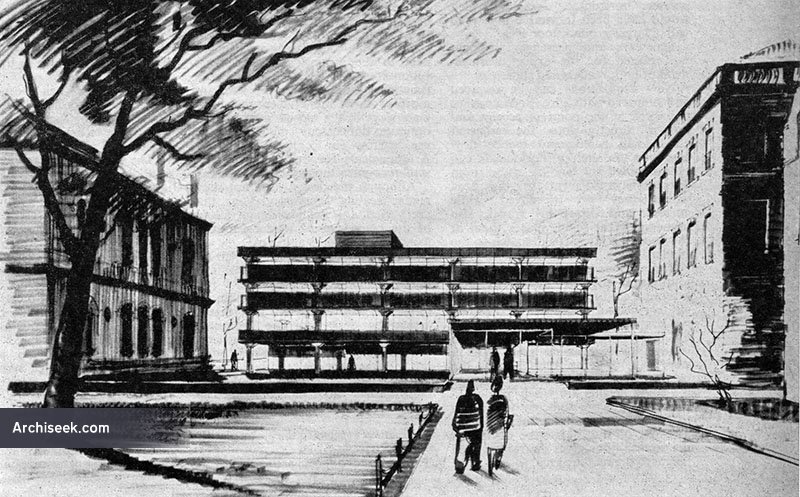 Second placed entry by Haifa-based architects Alfred Mansfeld and Dani Havkin. According to the architects: “In order to achieve a harmonious relationship with the existing library and the museum building and to avoid architecturally awkward connections with these old buildings, it was decided to detach the new structure from the older ones by sitting it well behind the permissible (northern) building line. Thus a square will be created in front of the new library, enclosed by the existing two buildings on its western and eastern side.” The exterior walls were to be of concrete faced with grey granite with dark anodized aluminium window frames.

Mansfeld began studying architecture in 1931 at the Technische Hochschule Berlin, but, with the rise of the Nazis to power, he moved in 1933 to Paris, France, where he completed his studies in 1935 at the École Spéciale d’Architecture, as a student of the architect, Auguste Perret. In 1935, he emigrated to Mandate Palestine. In 1949, Mansfied joined the faculty of the Technion – Israel Institute of Technology, where he taught for over forty years[1] and was Dean of Faculty of Architecture from 1954 to 1956.

The jury felt that “No.173… is an efficient, spacious, well-planned and economical building. It exhibits an almost classical simplicity of design , but the industrial characteristics of its construction are unfortunately apparent, columns with mushroom capitals being employed to obtain a flat floor slab without any beams that might obstruct ventilation ducts and services. The building is well sited in relation to the existing buildings, but its appearance might be improved if the podium were continued for the full length of the building and not allowed to die away. The physical link with the old Library is an attempt to centralize control and is handled sympathetically.”

The assessor’s report ends with “In general, the excellent proportions and tough straighforwardness of the building were much liked by the Jury, who consider that it holds its own with its neighbours and possesses considerable dignity and self-confidence.”