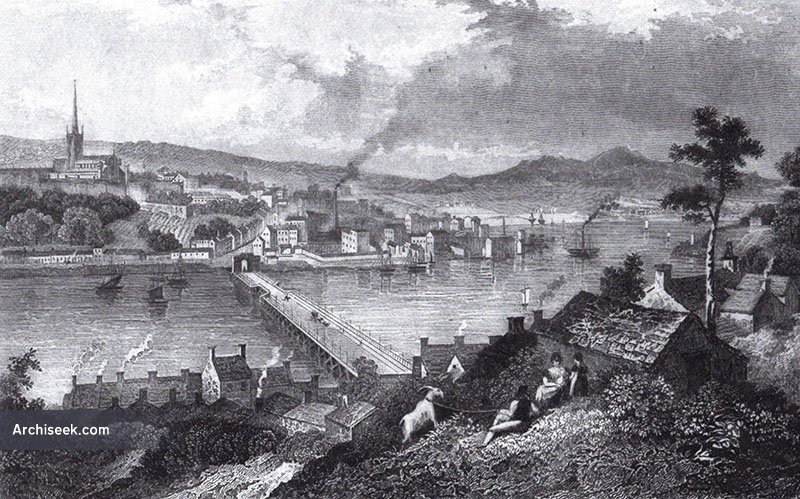 From The Dublin Builder: “Yielding the consideration of magnitude, there is none other – with certain comparatively trifling and remedial exceptions – in which the ‘Maiden Citie’ will suffer by comparison with any other city or town in Ireland. Nature has been peculiarly bountiful to her, and art too has, so far, fairly ministered to her luxuries, her necessities, and her adornment. Situated on the side of a hill, forming the western bank of the noble river Foyle the village of Waterside occupying the corresponding shore – ‘Derry’ (as for brevity we shall henceforth call her) when viewed from the summit of either, presents a charming bird’s-eye sketch.

The scenery along the river, as it widens and opens into Lough Foyle, thence discharging its waters into the broad Atlantic, is of surpassing beauty, facilitates being afforded for its enjoyment by means of suitable steam-vessels plying to and fro during certain months – a fact which we trust will be noted by such of our readers as meditate a tour northward during the coming season. By an antiquated timber structure, familiarly terms ‘the bridge’ – and the only bridge at present – some 1070 feet long, access, both for vehicles and pedestrians, is obtained from shore to shore; but one of our first items of progress to record is, that this time-honoured and well-tried friend, ‘with trembling limbs,’ will soon be relieved from his burden, and his work be performed by a successor whose physical constitution will be more suitable thereto, and his general bearing more in accordance with ‘the spirit of the age.’

From designs, and under the superintendence of the eminent engineer, Mr. Haskshaw, a combined railway and street traffic bridge, of noteworthy architectural character is in course of erection, and from the difficulties naturally presented to the formation of piers in a deep river, will, when completed, deserve to be ranked amongst the important achievements of modern engineering science. Of this, however – with illustration accompanying – we shall have more to say hereafter. The present railway terminus is most inadequate, internally, to the traffic, and the elevation, which never was remarkable for good taste, ‘nods obeisance to mother earth,’ and will soon make her closer acquaintance if not removed. This, however, we are happy to record is, together with other improvements in the vicinity, in contemplation. Considerable sums have been expended of late years in forming quays, but very much more requires to be done – and, we doubt not, will be, and speedily – before the accommodation is complete. 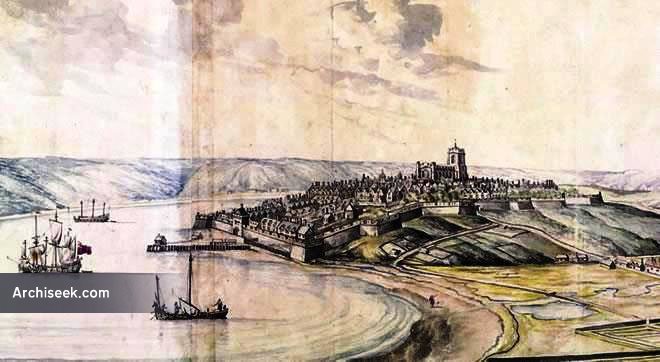 At Waterside, which may fairly be regarded as part and parcel of Derry, signs of progress are manifest, some tasteful villas being recently completed from designs by Mr. Fitizgibbon Louch, architect, and numerous others about to be reared (as we learn) under same direction. Confining ourselves for a while to the immediate city of Derry, the municipal boundary of which comprises some 497 acres – the most attractive feature first to particularize is, of course, ‘ the wall, of universal renown, and with which much historic interest is associated. This rampart, which is in a very perfect state of preservation, and spacious at top, extends about a mile in circumference, and is mounted with various specimens of the ancient cannon funder’s art, rejoicing in the soubriquets of ‘Roaring Meg’, ‘Long Tom,’ &c. &c. – now happily silent, but in former times proving rather troublesome customers, and still annually recreating them-selves by a sham display of their capabilities in memoriam of the siege in 1689. Connected with ‘the wall’ are six gateways, of which Bishop’s-gate and Shipquay-gate – at head and foot of two continuous streets bearing similar names and forming the chief thoroughfare – are the most remarkable for their similarity to the ancient triple-arched structures of Roman fashion. The steep incline of the streets named – the latter especially – is, we presume, attended with some disadvantage and inconvenience, and a regret must also be expressed that the vista should be impeded by the ugly Town-hall that stands midway in ‘the Diamond’ – a building we shall be glad to see soon replaced elsewhere by a better. 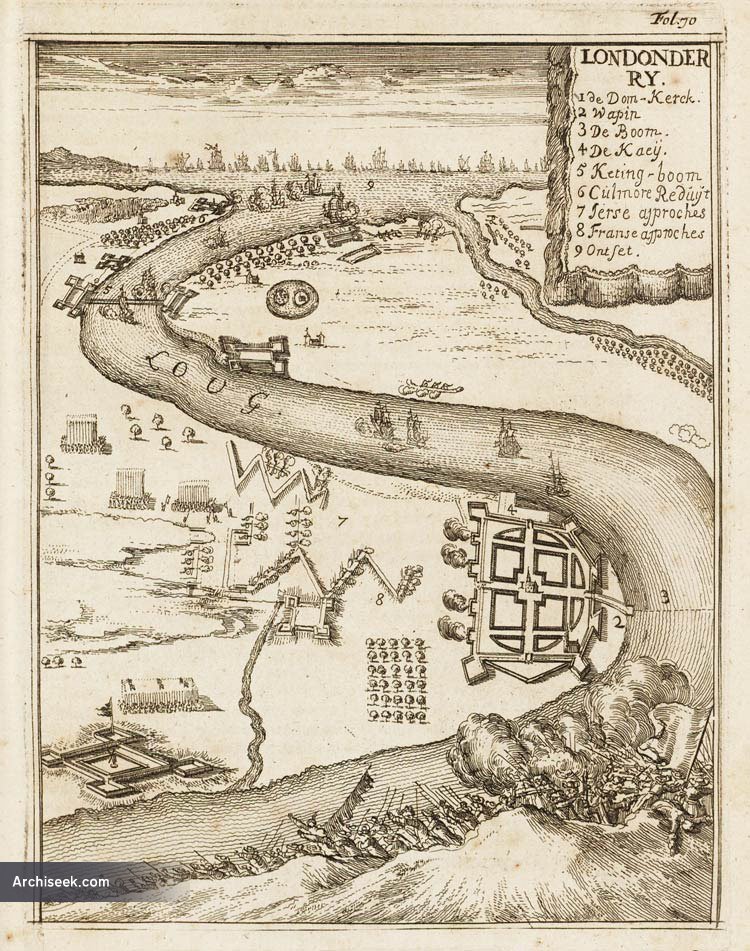 The Cathedral, which is within the walls, and close by Bishop’s-gate, is a venerable pile, but has not been improved externally by modern innovations; internally, however, the restoration was more successful, and at present important works of fitting and furnishing are, together with the removal of an obstructive gallery, being carried out under Messrs. Welland and Gillespie, architects, by Mr. James Henry, of Belfast, builder. A recent addition of a mural monument to the late gallant Capt. Boyd is a feature of intense interest, and the design elicits expressions of general approbation, but the omission of the word ‘Kingstown’ from the inscription is a very awkward oversight. The particulars of this design we have before given. While here we must note that the ancient organ is also being repaired and fit for active service, by Messrs. Telford, in this metropolis.

The court-house is ill-arranged but might be made more suitable by a small outlay, as it is a spacious and substantial building, mainly requiring only modification of the fittings in the apartments for Crown and Record purposes respectively. Of the other public buildings – inside the wall – there is a little occasion for comment, except as regards ‘the Walker’ monument – to the gallant Governor and Divine of siege celebrity – that for this or any purpose our previous antipathy to single tall columnar structures with a diminutive figure perched on its non-entablatured head was, in regarding this, fully confirmed; and further, the ‘gew-gaw’ Record building erected sometime since the Board of Works, is a glaring deformity, which might pass as a subject, for a chromo-lithograph, but whose stern reality will not stand the test of the most impartial criticism. Outside the walls, and passing towards ‘the strand,’ we come upon a block of buildings in the Italian style, at the intersection of two streets, reared some time since by the Ulster Banking Company, under the direction of Mr. Jackson, of Belfast, architect, to whose tasteful design, therefore, much merit Is due. For this, as well as various other works in the town and neighbourhood, Mr. McClelland, builder, who is also an extensive saw-mill proprietor, was the contractor. We hope the other Banking Companies who have branches here will follow the example of the enterprising ‘Ulster.’

A little farther on, at Sackville-street, we see preliminary preparations making for another, but much more extensive, block of commercial houses, with highly ornamental fronts, Mr. Louch being the architect, and Mr. McGinley the builder. Within near approach of this point a very odd market entrance presents itself to view, but respecting the wholesome admonition, ‘nil mortuis nisi bonum,’ we say no more than to express a hope that both it and the equally fantastic church close by, erected under same authorship, will, sooner or later, be numbered with ‘the things that were.’ Mr. Raffles Brown, of whose work in ‘Galway’ we had occasion recently to speak in eulogistic terms, has built a couple of good churches here also. The public establishment that holds its court in our Dublin Custom-house – and before alluded to – redeems itself in an architectural regard by the pretty Early English group of school buildings recently opened in this town, which reflect high credit on the designer as well as the contractor, and is a very desirable innovation on some of the previous ‘National Model’ specimens.

Ascending the heights we arrive at Crawford-square – the subject of the law case reported in extensor in our last publications – where the skeletons of four houses have been ‘run up’ how? – we hardly wish to note; but, as the site is very commanding, we hope to see operations carried on, and the errors of the past avoided. From this point there is a very commanding prospect of Waterside, the river, and a considerable part of the city; the tall spire of the Cathedral, and other churches, together with numerous factory chimney shafts, forming prominent objects. On an elevated and favourite site close by, in the Magee College, a highly meritorious Gothic composition, from the design of Mr. Gribbon, architect; indeed, it may not be too much to say, that this building cannot be excelled in point of architectural beauty, externally, by any of its class in Ireland; an illustration is in the hands of our engraver, and will shortly be present with full particulars.

The Roman Catholic Cathedral, a spacious Gothic structure, is approaching completion, from designs, and under the superintendence of Mr. McCarthy, architect. We learn, however, that the original designs, were prepared by a professional predecessor, and a large portion of the shell erected under his directions; and explanation due to Mr. McCarthy, as grave errors in building the foundation seriously affect the stability of the structure – the tower especially, where the settlements are truly alarming; so much so that its sustaining itself for a lengthened period would almost seem questionable, not to speak of raising a lofty spire thereon – a certain physical impossibility.

A little outside the town is a neatly laid out cemetery, as yet not extensively occupied, but which we trust will obviate the necessity of further intramural interments, which have been too frequent. Glancing at the town from a sanitary point of sight, Derry is not specially remarkable for its deficiency, but still much improvement is necessary in the neighbourhoods of Bishop’s-gate – which Priest’s-lane (the title, we presume, adopted without permission,) a nest of filth and infamy, adjoins; also of Ferryquay gate. The general character of the leading streets is remarkable for the English cleanliness – they are, moreover, fairly sewered, and well paved and lighted. In the manufacture of shirts a vast trade is pursued by several large establishments – that of Messrs. Tillie and Co., employing as many as fifteen hundred females; others, a thousand and eight hundred respectively, besides numerous minor ones. With this, the main industrial element, we must draw this notice to a close, not however without adding a word of merited compliment to the good people of Derry themselves, with whom our brief acquaintance – perhaps to be renewed again – is fraught with pleasing reminiscences.”