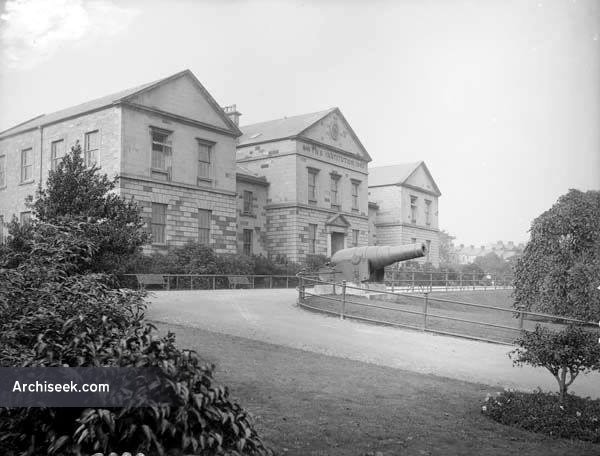 John Gwyn was a local businessman, who was born near Muff in County Donegal in 1754. He later moved to Derry with his mother and began a grocery business in Bishop Street. They prospered and John later became a linen merchant and gradually accumulated wealth. When he died in 1829, he left the bulk of his wealth amounting to over £40,000 for “as many male children of the poor or lowest class of society resident in and belonging to the city of Londonderry and the precincts around the same, as hereafter described, as the said funds will feed, clothe, and educate, orphans or such children as have lost one of their parents always to be preferred.”

An Ionic tetrastyle portico was originally intended for the main facade but was never constructed. It remained an orphanage until 1901 when Brooke Park was developed around it. It had many later uses including a museum, a library, a workshop for the blind, a pathological laboratory. It was destroyed in a fire in 1973 and, after lying derelict for some years, was eventually demolished.