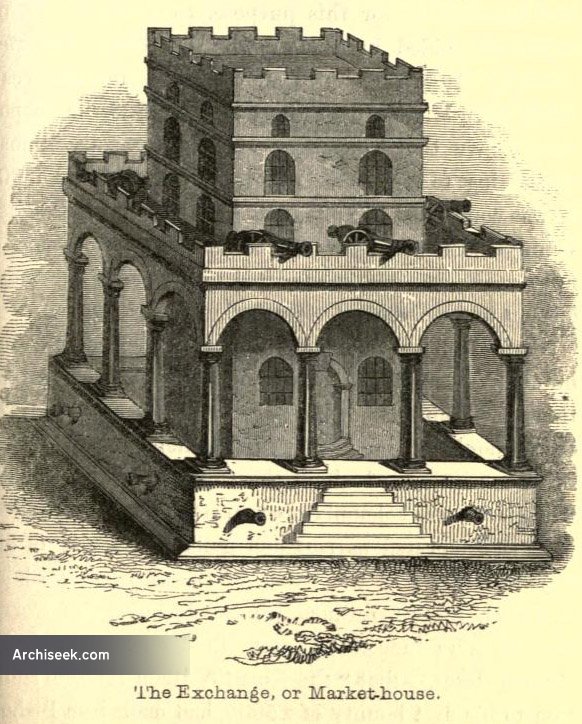 Originally erected by the London Corporation at a cost of over 500 pounds after a decision taken in 1616 that “a market house and a town house should be erected in Derry, by which the city of London would gain the rent of three houses then used for a town house there”.

Described in Tours in Ulster a hand-book to the antiquities and scenery of the north of Ireland., published in 1854.”The Exchange, or Market-house, which stood in the centre of the Diamond at the time of the siege, was so dilapidated by the shot and shell of the enemy that it had to be rebuilt when the city was being restored. Its civil and military character may be gathered from the foregoing sketch, copied from a drawing in Sir Thomas Philips’ MS., and engraved in the Ordnance Memoir of the city. This was replaced by one more in keeping with the peaceful and commercial objects for which it was intended: a grant of 1500 was given by King William and Queen Mary for this purpose, to which a sum of 300 was added by the grand jury of the city and county. It was rebuilt, accordingly, in the year 1692, after Mr. Neville’s plan ; and in 1823 the Corporation gave this building a thorough repair, almost amounting to a re-erection, at the expense of 5500. It was completed in 1826, and contains a very fine assembly-room, 75 feet by 36 feet, a commercial-room, a news-room, &c., and is admitted to be one of the most elegant and convenient town-halls in the kingdom.”