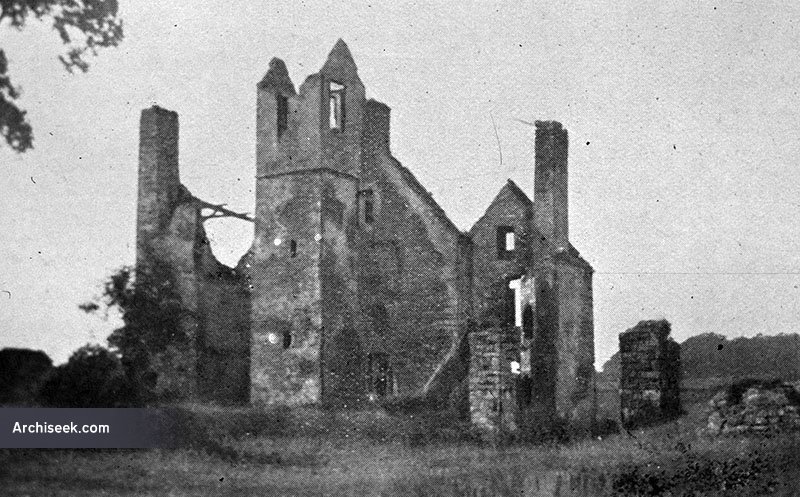 Elizabethan house, also known as King James’ Castle. Described in The Neighbourhood of Dublin, in 1912 as: “Due south of Finglas, and situated on the green banks of the Tolka, is the conspicuous ruin of Finglaswood House, an ancient structure, which during the Commonwealth was the residence of Henry Segrave, whose possessions were forfeited to the Government. Adjoining the house, and leading up to Finglas, is a narrow, shady path known as “Savage’s Lane,” from a family who occupied tlie house about eighty years ago. The most noticeable feature in the building is a lofty square turret, the lower part of which appears to be very ancient, probably dating from, the time of Queen Elizabeth, while the upper portion, constructed of brickwork. Seems to be of more recent date, and is covered by a modern, slated roof. The defensive character of the original structure is indicated by the massively built turret, with its inconspicuous loopholes commanding the approach to the entrance door, and by the arched entrance at the back to an under- ground passage, now fallen in, which probably led to some secret exit, while inside the front wall a large well furnished the place with water. Attached to the establishment were numerous out-offices, bakehouses, and stables, with extensive walled gardens, which still contain a few of the old fruit trees, and in the western side of the house may still be seen the remains of the great kitchen fireplace.

About a hundred years ago this house was used as a tannery, and since that time has been gradually falling into decay. Over the halldoor there formerly was a stone tablet bearing the arms of the Segrave family, the ancient territorial proprietors.

The whole structure presents the appearance of a dwelling- house built on to the nucleus of an old castle, which, however, has suffered such destructive alterations in the process as to leave but little by which to judge of its original design or character.

Like many other old houses in the neighbourhood of Dublin, popular tradition assigns to this building the dubious honour of having sheltered King James on the night of the Battle of the Boyne, and although there is no historical evidence to support this belief, the ruin is in consequence almost universally known as ” King James’s Castle.””