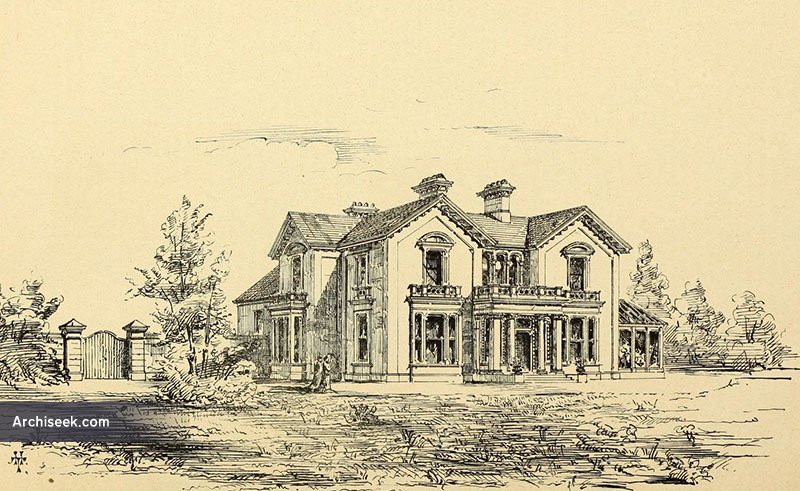 Constructed in 1866-69 – Fogerty’s Victorian villa was a new house in front of existing one, which has been converted into subsidiary offices. For John Lecky Phelps. Published in The Irish Builder, May 1 1869. Now demolished.

“With this number we give an illustration of Waterpark, CastleconneU, the residence of John Lecky Phelps, Esq. The property was purchased about ten years ago by Mr. Phelps, and the old house remodelled with offices and lodge added at a cost of about 2,000. More recently, a new house has been added in front of the old (which has been converted into subsidiary offices) at an additional cost of ^4,000. The new house consists of a hall 14 ft. wide, and extending the height of two storeys, with handsomely panelled walls, and coffered ceiling ; staircase to correspond, separated by a handsome arcade ; two drawing-rooms, each about 24 ft. by 18 ft., connected by folding doors ; library, 20 ft. by 16 ft. ; dining-room, 24 ft. by 18 ft., and a complete set of bed-rooms, dressingrooms, &c. There is a neat conservatory off the drawing-room. The exterior is finished partly in stone and partly in cement.

The chimney-pieces and internal decorations of colour and gilding are of very superior character, having been executed under the direction of the architect, by Messrs. Sibthorpe of Cork-hill. The internal doors are of Riga oak, also the margins of floors. The site commands delightful views of the Shannon and rapids of Doonass. There is a turbine for water supply, erected by Messrs. Ross and Murray. The general contractors were Messrs. Wallace and Son, of Limerick ; the ironmongery, grates, and some of the chimney-pieces being supi)lied by Messrs. Hodges and Sons. The architect is Mr. W. Fogerty, F.R.I.B.A., of Harcourt-street, and 1 Westminster Chambers, Victoria-street, London.” The Irish Builder May 1 1869