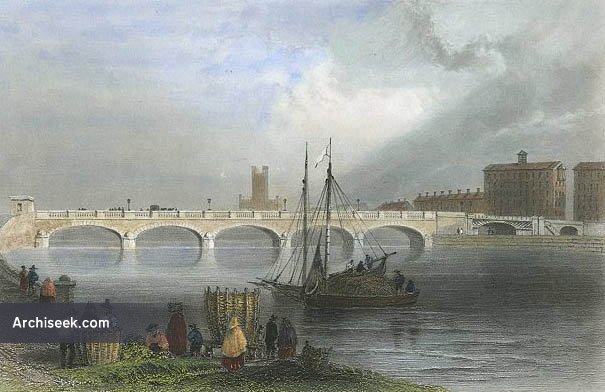 When completed in 1835 after 11 years of construction, it was named Wellesley Bridge. The Limerick Bridge Commissioners were incorporated for the purpose of erecting the bridge and a floating dock under the Act of 1823 entitled ‘An Act for the erection of a bridge across the River Shannon and of a floating dock to accommodate sharp vessels frequenting the port of Limerick’.

It consists of five large and elegant elliptical arches with an open balustrade, running from a man-made island, originally called Wellesley Pier but now known as Shannon Island, to the northern shore. Each span reaches 70 feet, with each arch rising to a height of 8 feet 6 inches. The contractor was Clements and Son. The existing metal swivel bridge, manufactured by Cleveland Bridge & Engineering Co. of Darlington, replaces an earlier nineteenth-century twin-leafed swivel bridge manufactured by Forrester & Co. Liverpool and connects the island to the shore. The swivel end is no longer functional, a lock system has replaced the swivel section to allow for the passage of smaller boats. .