DoCoMoMo Ireland and Limerick City of Culture presented ‘Rank’s Silo in the 21st Century’ an open international competition to develop ideas for whatthis iconic building in Limerick City might become. This architectural ideas competition sought togenerate discussion among designers and decision-makers about the future of the building.

The question posed by the competition was what will become of Rank’s Silo, one of Limerick’s most iconic modern buildings? In recent years, Rank’s Silo has become emblematic of a certain redundancy, being a part survivor of a much larger complex of industrial buildings that stretched either side of Limerick’s Dock Road. From its acquisition in 1930 to its eventual closure in 1983 it employed thousands in Limerick and touched the lives of many thousands in the surrounding countryside. During its 53-year history it has evoked many passions – ranging from revulsion to admiration – but it is ultimately a symbol of modern Ireland, constructed with a certain air of defiance.

There was a wide and rich range of responses to the open brief. Proposals re-imagined the building and its immediate environment in an innovative and exciting way. They included a diversity of uses including a craft centre, a piano recital space, an energy centre, a boat building facility, a swimming complex, a museum, a 3D printed fabrication laboratory, a library depot and even a drone delivery centre. All entries included architectural interventions, versions of preservation/ conservation, visualisations, functional proposals, urban proposals, and contextual imaginings.

The three prize-winning entries that finally captured the imagination and scrutiny of the invited jury included an Irish National Seed Vault, a Basilica and a Cultural Mixer. What was shared by all three prize-winning entries was their capacity to anticipate inevitable impact of change while allowing a plurality of uses and also making creative use of what already exists. 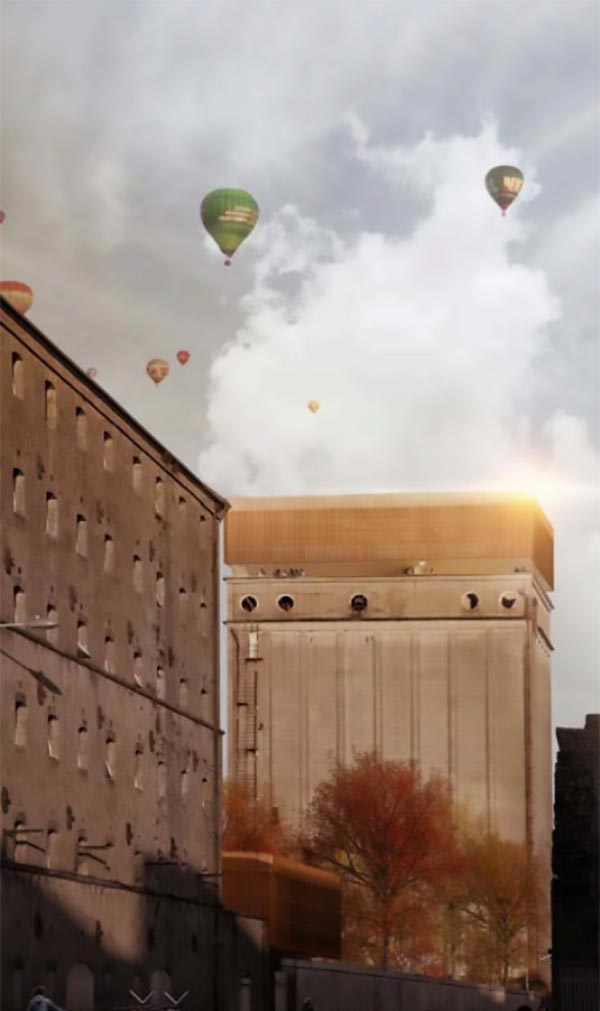 1st LM835 Irish National Seed Vault_Stephan Brugger + Eva Hierzer / AUSTRIA
‘In the context of a continued life for the existing silo building, this winning scheme clearly stood out. The silo’s proposed purpose and intent for seed storage is both highly pragmatic and ingenious in an overall reasonable way.

Placing the laboratory on top – presenting research as a beacon – is very apt in its use of what we have to publicly describe thinking, observing, working in a unique manner. The public observation deck as the clear break tucked beneath the laboratory is extremely well handled. The jury felt that the garden proposed for the public ground level could have been more developed but the dialogue between the silo and a new garden pavilion was admired.

The scheme is very Irish in many ways – it links into what we are in a very intelligent way. Its value and utility is very much immediate and graspable. This is a national project rather than a local one. 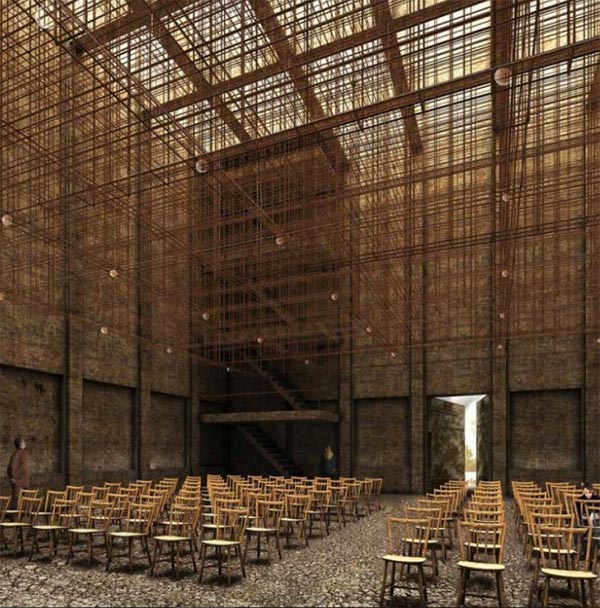 2nd LM1008 Basilica_ Philippo Ginnasta & Gabriele Lupo / SWITZERLAND
‘This is a very accomplished proposal. This entrant clearly likes the silo building. Of
the three premiated entries this scheme was possibly the most sophisticated. The entrant has a keen eye with strong architectural capacity. In such frugal times as now it seems very appropriate to propose very little – it truly captures the spirit of our time.

The silo as a basilica-like public room for events, concerts and public meetings seems like a legitimate use for the silo building. It is a beautiful proposal. The removal of the top floor-plate of the silo and the use of this concrete rubble to make the ground floor is very powerful. However the rendering of the silo shafts as light-filled seems possibly improbable – it may have been more powerful to represent the reality of darkness and faint light from this internal silo structure.

Franz S.Haselbeck’s photograph of the skeletal structure from 1936 is somewhat destabilized by this proposal and as a result the entrant perhaps does not fully recognise the value of the existing building. The matrix of thin steel bars does not look like a convincing structure and feels ultimately decorative.’ 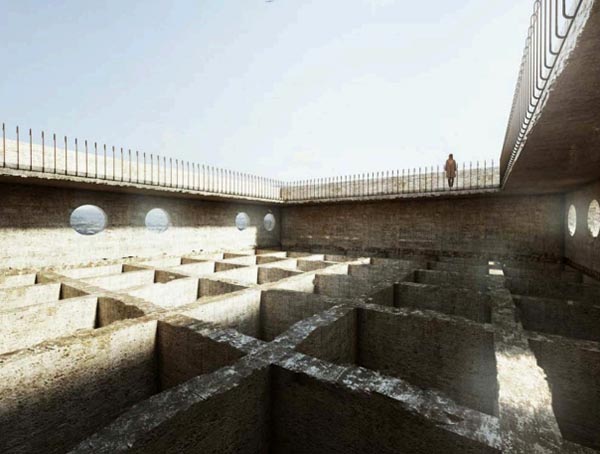 ‘This is a very strong piece of work. As an idea the idea of a cultural mixer is very strong. Compared to other entries the diagrammatic approach to the proposal is enjoyable. All the images are very beautiful and the panel is very well laid out.

What this proposal does is it gives the existing silo building visibility within Limerick City. It recalls the French library by OMA that proposes a gridded storage space into which occasional rooms like reading rooms are placed into the grid. It also evokes iconic images of L.A. Case Study houses where occupants have a deliberate relationship to a distant horizon.

Questions arise in relation to the practicality of construction. What seems to be missing here is judgment. The problem is the integrity of the existing silo as a result of these cut-out interventions. The cut-out areas seem highly improbable. The corner cut-out has destructed the silo too much.’

LM809 City of Craft: Re-presenting Ranks Silo_ Ciaran Conlon, Kieran Murray,
Conor Rochford & Su Wang / IRELAND
‘A complex scheme spatially and very strong graphically. Choice of material is very considered. It is quite a romantic project. The surprising treatment of existing structure makes the proposal very forceful. There are very nice moments like suspended archive spaces that is very compelling. The rendering of the horizon at the edge of the docks is very convincing. Of the schemes that erode the internal structure of the silo this seems the most convincing. However, like the others that do so, the integrity of the existing building is undermined as a result of exploding the core and character of the existing building.

LM852 Piano Fortissimo_David Flynn / IRELAND
‘This scheme is totally wild! It is surprisingly not convincing but possible! The plans are very nicely developed, in particular the integration of the cellular plan. Of particular note to the jury is the relationship of the perimeter galleries to the emptied-out central space. The presentation was deemed to be a little amateur. In particular the rendering of the spotlight on the performance demeans the idea which is truly quite extraordinary. It really would be an extraordinary space!’

LM861 Second Life_Kevin Kelly / IRELAND
‘The imagery is very nice. The silo is convincingly turned into a romantic American high-rise. The silo as a result is emasculated. This scheme however is probably stretching credibility in terms of programme and intensity. There is an air of Walsall-Art-Gallery-by-The-Shannon about it. The choice of programme seems too predictable.’

LM730 Library Depot for Limerick City_Briain Moriarty & Ben Mullen / USA+IRL
‘Nice proposition but the execution seems scanty. It is a pity that there is no main image that can capture the author’s intention and the viewer’s imagination.’

LM772 Shannon Ship Restoration_David Magennis / IRELAND
‘This is one of the few schemes that make a convincing and direct connection between the silo and the river. Section is carefully rendered. The credibility of removing the inner structure of the silo is questioned.’

LM848 Man-Made Mountain_David Jameson / UNITED KINGDOM
‘The imagery is very evocative. In a time of recession however the idea of a baths complex beside a body of water like the Docklands does not seem to be that relevant. The nibbling away of the internal silo structure seems incredible.’

LM894 Printing City_David McInerney / IRELAND
‘The in-depth research into the patent history of the concrete slip-form construction method is very impressive and worthwhile. The panel isalso very well presented and clear. The elaborate section of the 3D-printed addition atop the existing silo is less convincing and could be a lot simpler in order to be as compelling as research. The application of 3D-printed scaffold over Georgian Limerick is maybe a step too far’

LM905 The Deliver-Drone Centre_Sean Collins, Collin Dorgan & Ger Walsh /
IRELAND
‘This is a fun project, simple and clear. Beyond this it lacks a level of development and precision that would be anticipated for such a simple solution.’

LM918 Silo Cloud_Marta Lopez Rubio / SPAIN
‘The presentation is very compelling. The idea of energy collection through a cloud of balloons is dreamlike. However the relationship of the silo to the proposed cloud is underdeveloped.’

LM975 SiloH! Strolling in Limerick, On a High!_Simone Picano / ITALY
‘A very beautiful presentation. The images are very powerful. However the erosion of the interior structure and the insertion of a spiraling ramp seems to undermine the integrity of the existing silo building.’

LM998 Absolution_Ronan Power / IRELAND
‘The presentation is very beautiful. The choice of imagery is very well judged. However the legibility of the intervention does not to be that clear in terms of the architectural resolution. Like many of the schemes the radical erosion of the interior structure undermines the integrity of the existing silo building.’