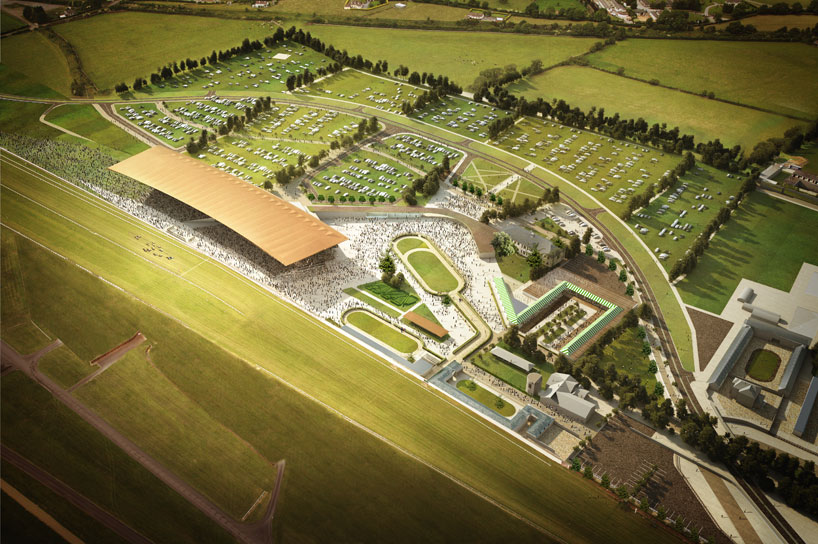 A consortium of two architect firms, international practice Grimshaw Architects and Limerick based Newenham Mulligan has won the international Architectural Competition to produce a concept design for the redevelopment of the Curragh Racecourse. Newenham Mulligan & Associates is one of Ireland’s oldest architectural practices having been founded in Limerick in1902. Today the practice has offices in Limerick, Dublin and London.

The competition which was promoted by the Turf Club began in May 2013. It attracted interest from over 100 architectural firms worldwide. The entries included many of the world’s most prestigious architectural practices. In accordance with best international practice, an Independent Technical Panel reviewed all of the compliant applications and shortlisted six companies to go forward to a Vision Design Stage. The Panel was chaired by Kay Hughes Principal Design Adviser and Head of Design at the London Olympic Delivery Authority, who successfully led the design direction and delivery of major projects for the 2012 Olympics.

The six Vision Designs were judged by the Awards Jury, chaired by Dublin born and educated Angela Brady, immediate past President of RIBA and director of Brady Mallalieu Architects London. The Awards Jury selected three of the six shortlisted teams to produce a more detailed concept design and present designs with a model to the Jury in the final stage of the competition. The Grimshaw Architects / Newenham Mulligan & Associates consortium was unanimously selected as winners. They beat off close competition in this final stage from Foster and Partners and BDP.

The decision to redevelop the Curragh Racecourse into a world-class facility to showcase the best of Irish racing was initially taken in 2005. The original planned project was deferred, after planning permission was received in 2008, given the adverse change in Ireland’s economic conditions. It was, however, recognised that there was a continuing and compelling need for such redevelopment. Following discussions with a number of key stakeholders the Turf Club decided to re-visit the project in 2011. It was agreed that the Architectural Competition was an appropriate first step in the process.

Racecourse General Manager, Paul Hensey stressed that this decision reflected only the conclusion of the design competition. The winning design is, at this stage, a concept and the next steps will include discussions with the winning consortium to see how best the design aspects of the project can be developed to meet all of the Curragh’s requirements, respecting the views of many stakeholders. “ We are at the start of an exciting process and look forward to taking the design to the next critical stages in making it become a reality and bringing this vision to life”, he said.

Angela Brady chairman of the Awards Jury stated: “This was a very well run competition and being anonymous for all stages until the final presentation was an essential element in the judging process. We examined six short listed projects all very different and unique. In the final stage of the competition our jury were faced with three exemplar designs and it was always going to be hard to decide the winner. However after much discussion and testing of the design ideas our jury came to a unanimous decision. We wish the design teams and client group and supporters every success in bringing their vision for the Curragh Racecourse to fruition, to add to the excitement of horse racing in Ireland”.