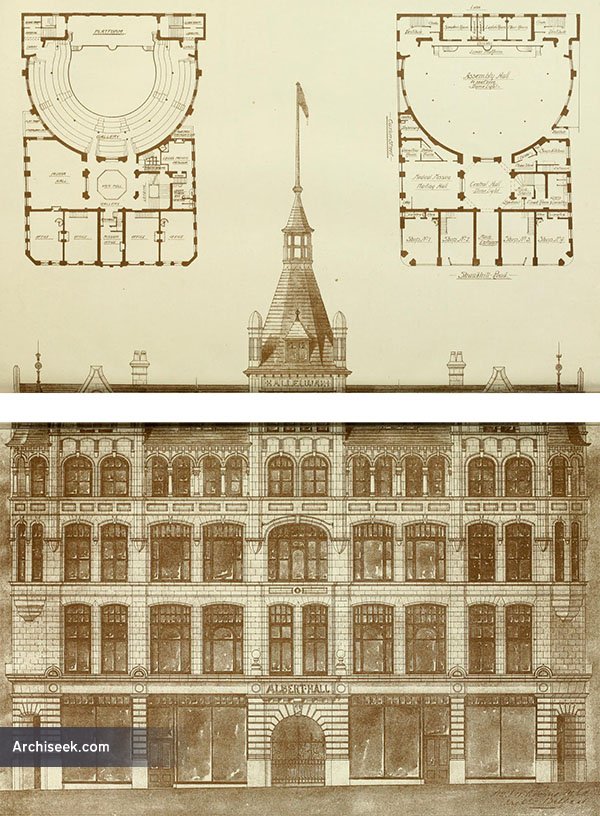 Large amphitheatre to seat about 2,000, medical mission , soup kitchen, with four shops fronting road. Closed in 2009, the mission originally started in a large tent in 1869 and was founded in order to help the people of the Shankill who were at that time living in extreme poverty. In 2010, the Shankill Road Mission congregation was amalgamated with the Townsend Street congregation.

“This block of buildings, of which the foundation-stones were laid on Oct. 23rd, has a frontage of 92ft. and a depth of 13.5ft. free from ancient-light restrictions on every side. In designing the building it was sought to avoid the long corridors, so universal in buildings of this description, by contriving a central octagonal hall with galleries round and large dome light. This hall will give access to all the departments of the building which radiate from it. The building is divided into seven principal departments. The first of these is a large hall capable of seating about 2,000 people, designed in the form of an amphitheatre with a single gallery. This hall will have entrances and exits from the Shankhill-road, and also from Carlow-street, will be well lighted, and will be in all respects a hall well adapted for large social gatherings. In connection with the hall are gentlemen’s, ladies’, and choir committee- rooms and cloak-rooms. The second is a medical mission department, comprising a large waiting-hall, capable of seating about 200 ; a doctor’s consulting-room, and dispensary and dressing-rooms. It is entered by the main entrance from the building, and wUl also have a separate entrance from Carlow-street, enabling it to be used directly from the outside. The third, or business, part of the premises will consist of four large shops — two on either side of the main entrance — and also commodious offices over these shops. The fourth is a soup-kitchen department, with ample convenience for cooking and supplying soups and other nourishing provisions for the benefit of the poor, and also giving the necessary plant for supplying large social gatherings in connection with the mission.

This department can also be entered direct from the Shankhill-road. The fifth section comprises a minor hall and classrooms. This hall will be situated on the first floor, and capable of accommodating 2.’)0 people. There will also be several class and committee-rooms. The sixth is a social and recreative department. These rooms will be situated on the second floor, and will comprise general parlour, men’s reading-room and library ; boys’ club-room and girls’ guild-room ; and also ladies’ private sitting-room and bookstall. The seventh department is the residential training home ; this will comprise four separate departments — (1) a wing with parlour and bedroom accommodation for gentlemen students, and a corresponding wing for lady students ; (2) the superintendent’s residence ; (3) the servants’ department ; (t) the lecture-hall and classroom department. Altogether there will be accommodation for 20 students. Over a part of the building there will be a flat roof with staircase communication, so that it can be used as recreation ground in the summer months. The materials proposed in the construction of the building are Scrabo stone for the front elevation and part of the return, with red brick for the remainder.

The roof will be covered with Westmoreland green slates for the towers and front part of the building. The N.A.P. Window Co.’s patent fittings are being adopted for principal windows. The main entrance-hall and cloakroom walls will be tiled, and granite plaster will be used on the walls in more general use. There will be fireproof floors over the greater part of the first two stories, thus making the building not only more secure, but preventing the passage of sound from one part to the other. Infernal fittings have been designed in an inexpensive but substantial manner. Mr. W.J.W. Roome, M.S.A., is the architect, and Messrs. McLaughlin and Harvey are the contractors.” The Building News, March 4 1898.