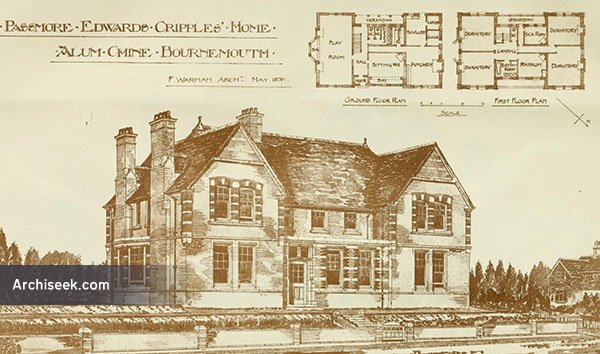 “The building, as shown in the illustration, has been erected on a charming site in Alum Chine, by the liberality of Mr. J. Passmore Edwards, whose gift it is to the Ragged School Union, and will accommodate about 25 crippled children. The architect is Mr. Frederick Warman. The Marquis of Northampton, as president of the Ragged School Union, opened the home on Tuesday last. Nearly 10 friends travelled from London to attend the ceremony, among them being Lord Northampton, Mr. Henry Wood (chairman of the Ragged School Union), and Mr. J. Passmore Edwards. The Mayor of Bournemouth, who presided, said he felt sure that Bournemouth would help forward the new home, as they were already helping’so many other local institutes of a philanthropic character. Lord Northampton expressed the pleasure it always afforded those engaged in Ragged School Union work to receive letters of sympathy from outside London. When the offer came from Captain and Sirs. Harrison to start a temporary cripples’ home in Bournemouth, his advice to the secretary was to “jump at it.” He acknowledged the great debt of gratitude owing to Mr. Passmore Edwards for a further proof of his generosity in erecting the home, and hoped his example would be followed, so that all the 6,000 crippled children under the notice of the Ragged School Union might spend part of their lives beneficially at Bournemouth or some other seaside resort.” Published in The Building News, June 17 1898.