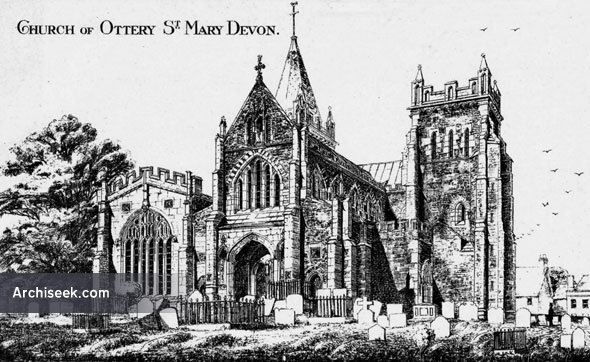 Nikolaus Pevsner described the building as as “lying large and low like a tired beast”. It is 163 feet long, and the towers are 71 feet high. It was consecrated in 1260, at which time the manor and patronage of the church belonged to Rouen Cathedral, as it had from before the Norman invasion. Pevsner assumed that the tower-transepts and the outer walls of the chancel dated back to 1260, and that the towers were built in imitation of those at Exeter.

In 1335 John Grandisson, Bishop of Exeter, bought the manor and advowson from Rouen and two years later converted the church into a collegiate foundation with forty members. He rebuilt much of the church, and the present nave, chancel, aisles and Lady chapel date from this time. The nave is of five bays, and the chancel, unusually long in proportion, is of six, with vestry chapels to north and south.

The church is noted for its painted roof and early sixteenth-century fan vaulted aisle, the Dorset Aisle, designed and commissioned by Cecily Bonville, 7th Baroness Harington, whose first husband was Thomas Grey, 1st Marquess of Dorset.

The building was restored in 1850 by the architect William Butterfield. His alterations included lowering the floor level of the transepts, crossing and western part of the chancel to that of the nave, making the east end, designed for the needs of the collegiate foundation, more suitable for parochial use.