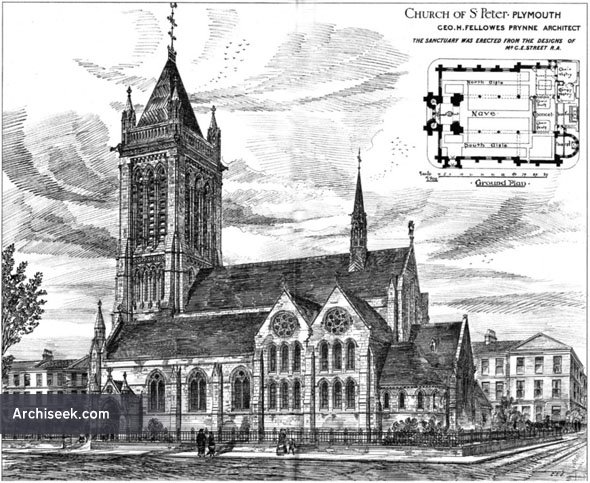 The Sanctuary was erected to the designs of George Edmund Street. 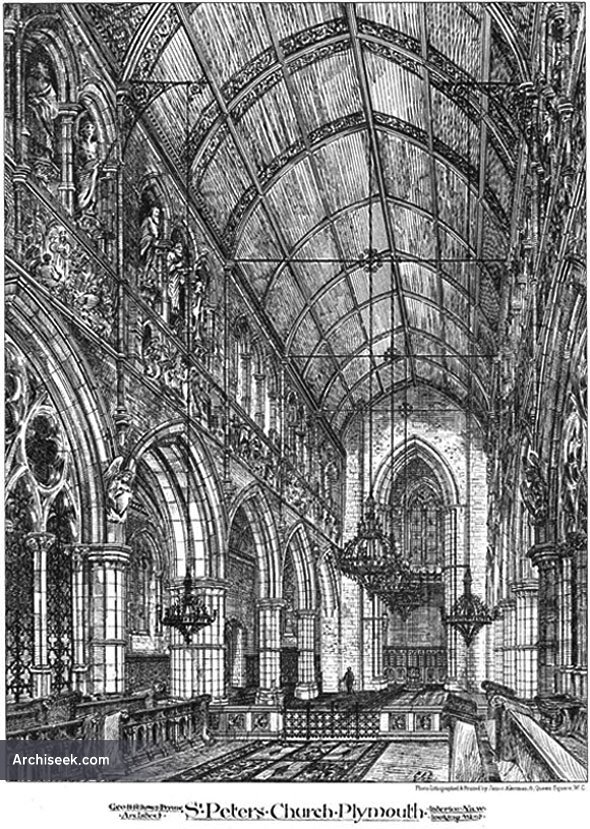 “The building that has been known by this name for some 40 years was originally built for Rev. John Hawker, as a kind of Free church. The building was secured to the Church of England shortly after Mr. Hawker’s death. In 184S, the Rev. Geo. R. Pryune was appointed to the new parish by the late bishop. Dr. Philpott. In 1849, a sacrarium was added to the building, and choir stalls and screen, arranged from de- signs of Mr. Geo. E. Street, R.A. Although all that could be done was done to improve the original ugly edifice, the want of a better and more spacious building has long been felt, and recently some liberal donations have justified the commencement of the work. The new St. Peter’s will, in the main, be cruciform in shape. A characteristic of Devonshire churches has been followed in putting barrel roofs to both aisles and nave. The one fault, want of height, usually so conspicuous, has been avoided by raising the nave-roof to the height of 60ft., and thus allowing space for mural decoration over nave arcade and clerestory above. By special request, the sanctuary and present vestries had to be retained. The retention of these portions, and at the same time working them into the new design, so as to get pleasing harmony and grouping, has been one of the principal difficulties with which the architect had to contend .

The sacrarium being low, and the fault of the site being want of length, it was thought wise to keep the sacrarium, as such, entire, and the choir is therefore placed under nave-roof ; the continuity of the roof being thus unbroken, more apparent length is obtained. The two arches on either side of choir will be filled in with an open traceried stone screen. The chief entrance, under a massive western tower, has a tympanum, on which will be a representation of ” The Majesty,” with adoring angels on either side. The tower is to be about 12.5ft. to top of para- pet, and will be capped with a lead-covered roof, cresting, and cross. The south double transept will, as it were, form the nave to the small apsidal-ended chapel. A graceful fleche, surmounting the roof, will indicate on the exterior the limits of chancel, and serve as a bell-turret.

The fleche will also be used as a means of ventilation, the various ventilators in nave roof communicating with it. The stone used for the exterior facing, as well as the interior ashlar, will be the local limestone, better known as “Devonshire marble.” The effect of this stone internally is very beautiful. Corsham Down stone will be used for all soft stone internal work ; Beer stone being used for tracery, window and door-jambs, kc. ; and Doulting stone being retained for all external strings and weathering. The church will be heated with Mr. Grundy’s hot- air apparatus. The present outlay will amount to over £10,000, but the total cost when completed will probably be about £14,000. The foundation-stone was laid by the Earl of Devon, April let, 1880. The present contract is to be completed by August, 1881. Tlie architect is Mr. Geo. H. Fellowes-Prynne, of 11, Adams- street, Strand, W.C. ; the builder is Mr. Alfred Guy, of London.” Published in The Building News, November 12 1880.