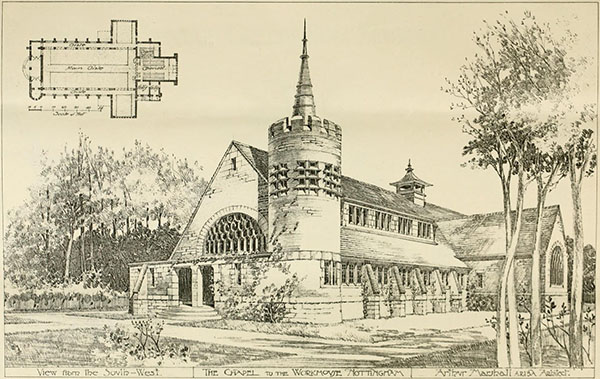 Following the demolition of the Nottingham Union workhouse in the 1890s to make way for the Victoria Station (itself since closed and demolished), a new workhouse was built at Bagthorpe to designs by Arthur Marshall (1899-1903). The Workhouse was eventually developed into the City Hospital. The chapel was probably completed in September 1902, but baptisms between 1898 and September 1902 are recorded. The new church was a private chapel for the use of the Workhouse inmates and staff, and so was not officially consecrated. It was decided to close St Luke’s in 1988, when the present chapel on the main corridor of the City Hospital was opened. Since its closure as a chapel the building has been used by the hospital as a store.

“The chapel, of which we give a separate view, is placed on the knoll commanding the whole site. The total accommodation in the entire building represents provision for l,611, exclusive of members of the staff. The estimated cost is 250,000, and the whole is being carried out from plans and under the supervision of Mr. Arthur Marshall, A.K.I.B.A., architect. Nottingham, the clerk of the works being Mr. Foxworthy.” Published in The Building News, July 1 1898.