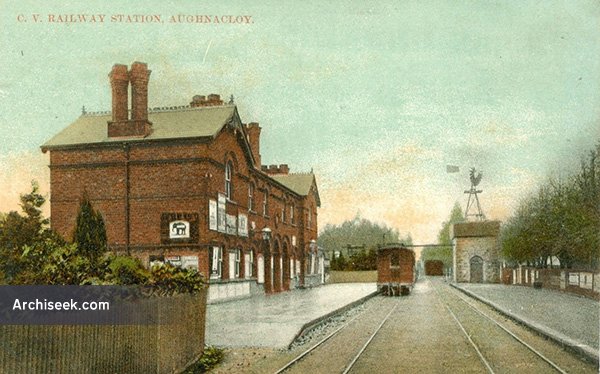 Aughnacloy was the head office of the Clogher Valley Railway and is the most substantial building on the line. The Clogher Valley was a 37 mile long, narrow gauge railway, opened in January 1887. It is a two-storey building in red brick with gabled bays at either end. From the platform three semicircular arches led to the booking hall. The railway closed on New Year’s Day 1942. The station building still exists, although very few traces remain of the railway around it.

The western terminus of the railway was Maguiresbridge, County Fermanagh, where the line shared Maguiresbridge railway station with the Great Northern Railway on the Clones to Enniskillen line. It then served Brookeborough, Colebrooke, Fivemiletown, Clogher and Augher until reaching Ballygawley station, at which point the line turned in a south-easterly direction to Aughnacloy, Caledon and the terminus at Tynan, County Armagh where the Great Northern Railway was again met.