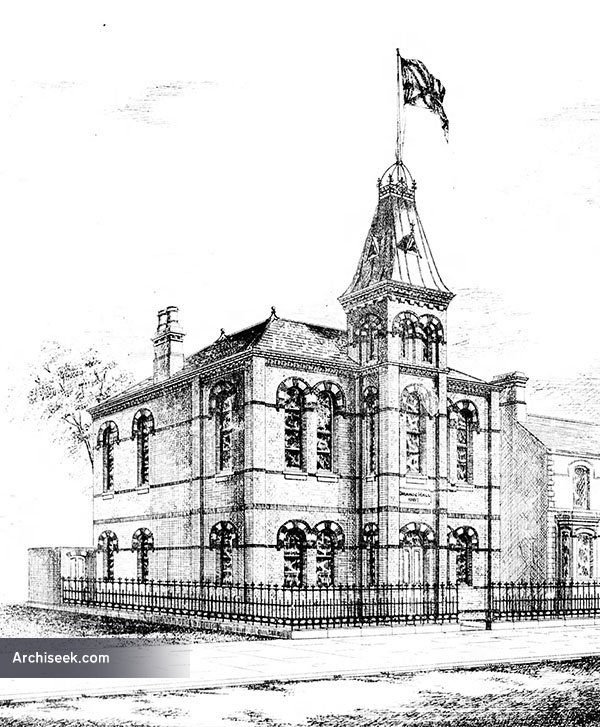 William Batt had designed several other Orange Halls including the Orange Hall in Clifton Street, were he was a member of Eldon L.O.L. No 7. Watt and the hall committee believed that the building should make a public statement and be a focal point for its community. To achieve this, the interior of the building would be designed around its exterior – with the tower as the main focal point. In 1887, when completed, the Orange Hall would have been one of the tallest buildings in Ballynafeigh. The building is finished externally in red and black brickwork. Still in use today, and largely as designed. Illustration published in The Irish Builder, November 1 1887.

“THE above hall, which we illustrate in present issue, is built of perforated red brick, having blue brick arches and string courses—the former being neatly tuck pointed. The apartments are well lighted and ventilated, and the roof timbers of main hall, which are exposed, wrought and chamfered, and two of Boyle’s patent foul air extractors are fixed above.

The plans, selected in competition and admirably arranged for the purposes intended, were prepared by Mr. William Batt, architect, Royal Avenue, and the buildings have been erected under his superintendence by Mr. R. J. Kerr, builder, Donegall Pass, in a very satisfactory manner, and were publicly opened on 17th ult.”