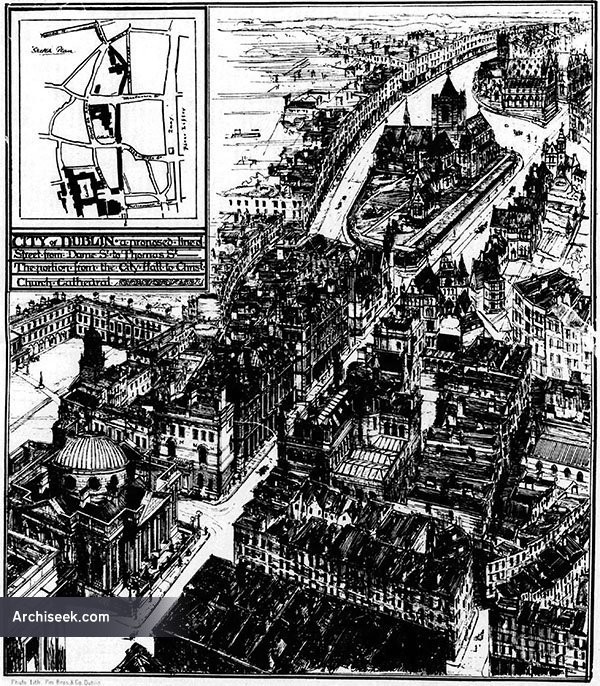 “This illustration is such a reproduction from a rough sketch made some time back by Mr. Drew, RHA to realise for some parties interested the effect of a new street from Dame-street to Christ Church and Thomas-street. The sketch made before it was decided to build Mr. Street’s new synod-hall on the site of St. Michael’s Church and it accordingly shows the synod-hall where it was then proposed – to the south side of the cathedral, – and imaginary new buildings of Gothic character on the site of St. Michael’s Church.

Mr. Drew advocates as the best possible line of street, the production of Dame-street in a straight line as far as St. Michael’s Hill. This, crossing Fishamble-street and Winetavern-street at existing levels , would give the best obtainable gradients, being a rise of about 1 in 50 from the City Hall to Fishamble-street; thence nearly level about 50ft. north of Christ Church Cathedral. From Winetavern-street Mr. Drew’s Line would continue for a short portion on arches above the level of Cook-street, winding round St Audoen’s Roman Catholic Church, and above the ancient ruins into Thomas-street.

All this, however, is a vision too good to be realised while that glorious institution, the Corporation of Dublin, continues to muddle the interests of the city and increase the dead-weight of debt; unless, indeed the powerful ‘syndicate’ of the brewers and distillers who hold the region of Thomas-street should take the matter in hand.” Published in The Irish Builder, November 1 1874.