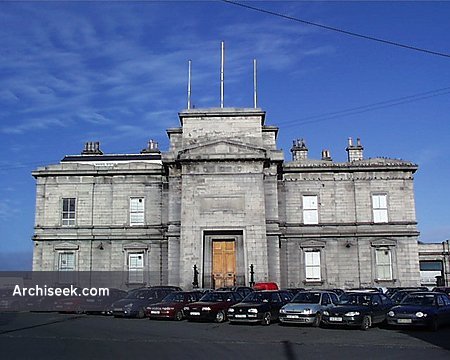 Broadstone harbour’s location was chosen for its proximity to the markets and the law courts. Bolton Street was the preferred site, but high land prices and objections from local residents forced its relocation to Broadstone. The Kings Inns, designed by James Gandon, was built opposite the harbour and, like the Four Courts and Custom House, was designed with its frontage on a waterfront.

By 1807 a regular passage boat service was operating to Mullingar. In 1845 the Midland and Great Western Railway Company (MGWR) purchased the Royal Canal Company as they wanted to run their new railway to Mullingar on the land alongside the canal. 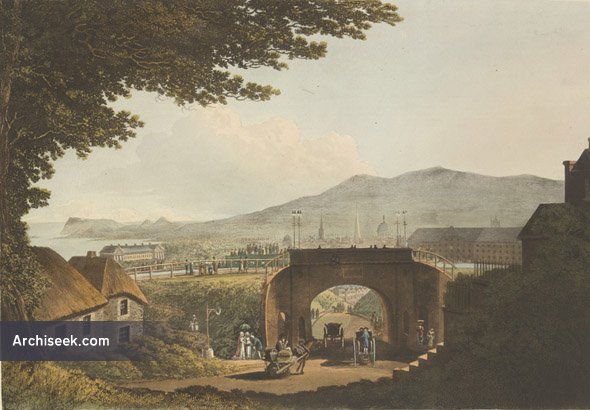 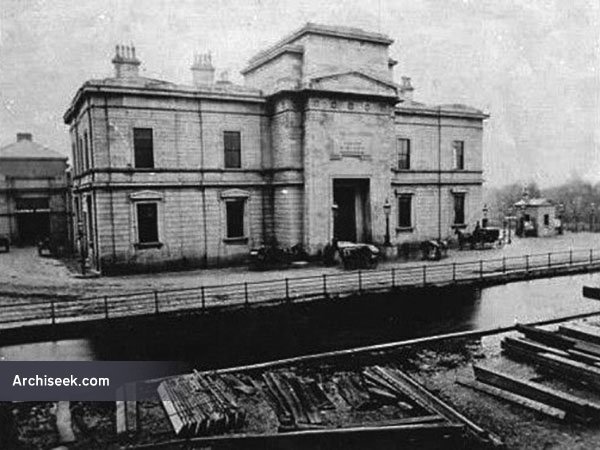 Their new headquarters and railway terminus at Broadstone Harbour was completed in 1850. This imposing building, designed by John Skipton Mulvany (1813-1870), was built overlooking the harbour. A pontoon bridge across the canal gave access to the station. The MGWR soon lost interest in the canal business and in 1877 they received powers to close 150 yards of the branch and to fill in the harbour. Which they did to construct a new forecourt for the station. That removed the need for the pontoon, and a new approach road, Western Way, was built by way of the aqueduct. A new quay and stores were to be built on the other side of the aqueduct but that never happened and, with Spencer Dock operational since 1873, boats gradually stopped using the branch.

This is the most monumental of the four railway terminii of Dublin and now no longer used as a railway station. In fact it is not even connected to the rail network and its forecourt is a surface carpark. Sited on a hill, its most dramatic feature is its railway shed with its huge colonnade of columns. The station was designed in an austere neo-egyptian style and constructed of granite.

The original railway shed roof designed by Richard Turner proved to be too ambitious for the span and was replaced after it collapsed in the early 1850s. Originally there was a canal spur from the Royal Canal to a basin in front of the station.

Just eleven years after the station was built extensive alterations were made to the terminus, including the erection of the beautiful colonnade. As the “Freeman” newspaper stated: “Today or tomorrow the alterations which have been for some months in course of preparation, come into effect at Broadstone Terminus. To avoid the inconvenience and possible dangers of changing rails as hitherto in leaving or arriving the trains were compelled to do, the platforms have been altered from one side of the building to the other. The south-west will, in future, be the departure side, the north-east the arrival; the travellers leaving Dublin passing the front of the terminus and reaching this platform by a handsome collonade, supported with metal pillars, and through a spacious ticket office. On this the departure platform will now be found with waiting rooms and in an additional storey the offices of the traffic manager, engineer, the auditor, also spare rooms, suitable for branch company’s uses, all to the number of nine, opening on a corridor 300 feet in length.”

“On the opposite side the arrival platform has now been formed. It opens on a magnificent collonade, about fifty feet in width by 600 feet in length. This is appropriated to vehicles of every description, which can leave its inclosure with the utmost celerity. The alterations are decided improvements. They have, we understand, been carried out under the supervision of Mr C Wilkinson, of Westland-row. The interior of the station is being further beautified by the painting in bright colours of the roof, pillars and delicate iron work of the spacious and graceful shed – the building, altogether, presenting a railway terminus in every way worthy of a great and enterprising company”.

In 1956 the final stretch of water from the North Circular Road, behind Mountjoy Jail, was filled in. In 1924 the MGWR amalgamated with its rival, the Great Southern and Western Railway. Subsequent rationalisation saw Broadstone as a maintenance depot, with passenger services withdrawn in 1937. All steam locomotives were transferred there in 1954, but when steam locomotion ended in 1961, Broadstone was closed.

This magnificent building is sadly neglected by its owners CIE and deserves better.