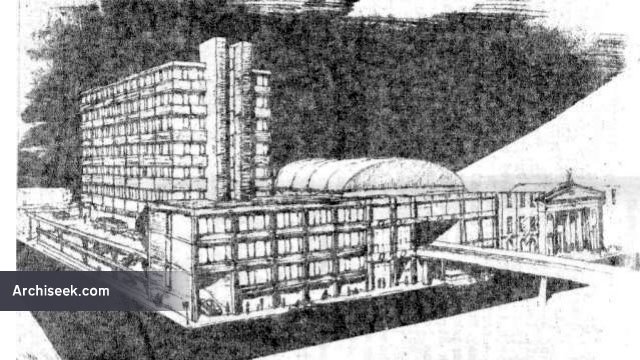 A proposal by CIÉ, in association with the Irish Life Assurance Company, for an office block at Pearse Station. The planned structure was to be 8 storeys above ground and 5 storeys above platform level. This was seen as the first stage in a major development plan for CIÉ’s many valuable properties, principally in Dublin, but also in provincial areas where the opportunity arises. The idea was to move most of the CIÉ headquarters staff into it after completion. It is thought that some 130,000 sq ft of space would be so required, leaving some 100,000 sq ft for rental to other tenants.

“An artist’s impression in the October “Travel Express” shows the new block rising from the site occupied by the Down side carriage entrance and the offices of the Civil Engineer’s Department. In addition, the buildings between the station and Pearse Street, fronting onto Westland Row, are replaced by a new four-storey structure. The unusual cast iron frontage of the station appears to be retained, as is the handsome arched roof over the platforms.” Irish Railfans News, November 1973.