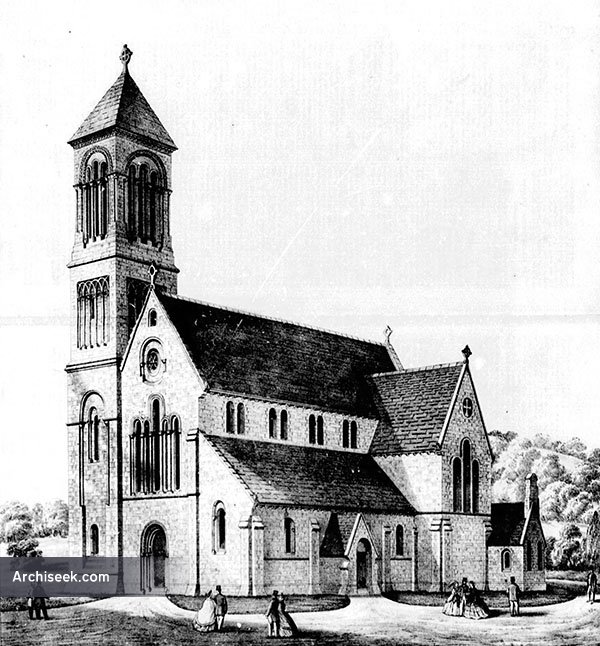 Although the foundation stone was laid in 1861, a disagreement between the architect John Bourke and the parish priest, in effect the client, meant that work stopped. Work began again in 1867 to designs by William Caldbeck and completed in 1872. Caldbeck also designed the Bank of Ireland bank in Moate among other commissions in Westmeath during the mid nineteenth-century.

“IT is intended to commence immediately the erection of a Catholic parish church in the town of Moate. The style adopted is late Norman. The church will be cruciform in plan, and will contain nave, aisles, transepts, circular apse, side chapels, tower, baptistry, sacristy, porches, &c.; it will be 110 feet in length, 70 feet across transepts, and 51 feet across nave and aisles; cylindrical stone columns, with the characteristic Norman capitals supporting recessed and moulded arches, will divide the nave from the aisles; the aisles will be lighted by recessed semicircular headed lights, and the clerestory will be lighted by coupled lights of the same character. The entrance front will contain a deeply recessed Norman doorway, surmounted by a columned arcade, the alternate opens of which will be filled with glass. In the point of the gable will be a circular wheel window, recessed, and finished with columns and mouldings. The transepts will be lighted by triple windows, recessed. The tower will contain a rich moulded doorway, and will be decorated on the four faces of the second stage with arcades; the third stage will form an open bellcot, divided into three divisions on each face by Norman pillars, supporting arches, finished by a corbel table. The entire will be surmounted by a lofty pyramidal stone roof, terminating in a small Irish cross, 102 feet from the surface. The roof, which will be about 56 feet to the apex, will be of open timber-work. The chancel will be finished with a circular groin, springing from short columns supported on corbels. An organ gallery will be constructed, projecting from an open in tower, which will terminate one of the aisles. The material is the limestone of the district.” July 16 1861.

“The foundation stone of a new Roman Catholic church, as above designated, was laid on the 27th ult., and the building which will be erected after designs by Mr. John Bourke, architect, is provided to be cruciform on plan, with nave, aisles, transepts, apsidal chancel, side chapels, baptistry, tower, etc; the dimensions in clear being 110 feet by 53 feet by 68 feet across transept; height to apex on roof 60 feet. The Norman style is observed throughout, and the nave is to be separated from aisles by lofty arches springing from cylindrical columns with characteristic capitals and bases. At intersections of transepts and chancel with nave, four great arches are introduced which will have a very imposing effect. Light will be obtained for the nave and aisles by semicircular headed doublet windows in clerestory and flank walls; and for the transepts through triple windows; the chancel and western gable being also perforated. A tower with a spire rising to a height of 105 feet from ground line will terminate one of the aisles. We have very few good examples of this style in Ireland, and are glad to see symptoms of its revival” The Irish Builder, November 1 1861.