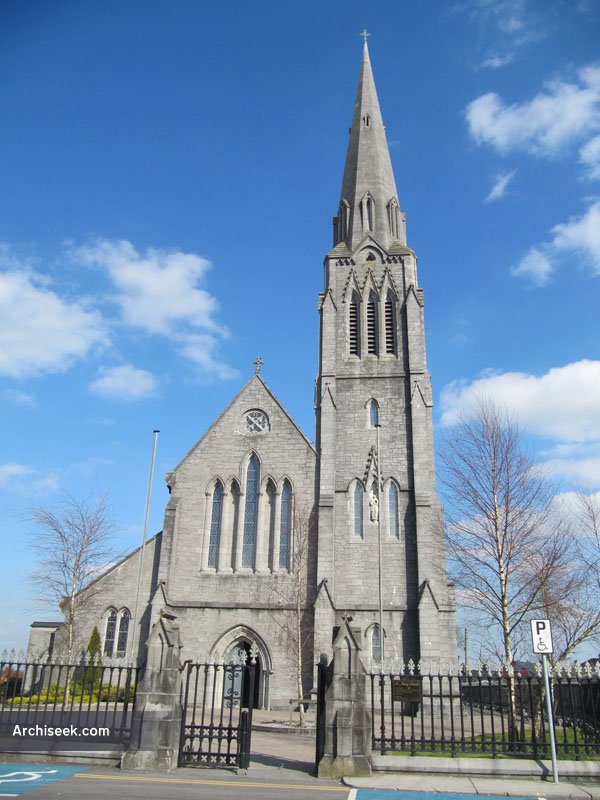 Constructed between 1857-61., and considered one of Bourke’s finest works. The exterior is dominated by the slender tower and spire, with a set of five lancets with alternating blanks and windows on the main facade. The interior has a fine timber roof structure. The original fittings included a pulpit designed by J.J. McCarthy and carved by James Pearse, but this was removed post Vatican II. There is some fine stained glass by Mayer of Munich, and a window depicting the Resurrection that was made in Amiens and exhibited at the Paris Exhibition of 1878.

“The site of the building is exalted and advantageous, though in proximity to the old church, which was in every respect unsuitable. Early English was adopted for the architecture, and the interior comprises nave, aisles, transepts, chancel, side chapel, sacristy, porches, organ-loft, baptistery, tower (with stairs to organ-loft), and spire, 190 feet high; measuring in the clear 130 feet by 57 feet, and across transepts 66 feet. The west front contains a moulded door underneath a great window of five lancets, each alternate opening being filled with glass, and the intermediate opens being intended to receive figures. This window, which forms a triple lancet on the interior, is furnished with slender columns, and the upper part of the gable is filled with a recessed wheel window. The chancel and side chapels are lighted by richly traceried windows filled with stained glass, and the central window contains an exceedingly artistic representation of the Nativity of our Lord, and has been procured from Caen in Normandy. The transepts are lighted by triple windows of graceful design, and the aisles and clerestory are lighted by double carped lancets. Cylindrical columns of Wicklow granite, supporting richly-moulded arches, divide the nave from the aisles; four great arches from the junction between transepts, chancel, and nave. The roof is of open timber work, with carved tracery. Mr. John Bourke was the architect.” The Irish Builder, November 1 1861.