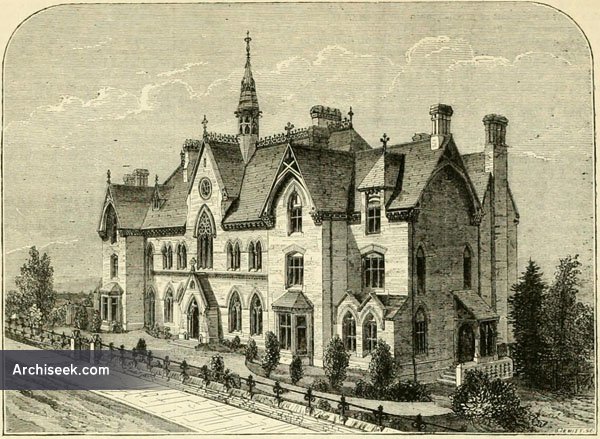 The Nottingham Congregational Institute, a theological training college for Congregational Ministers, was established in Nottingham in 1866 by the Rev. J.B. Paton. From 1868 it had premises on Forest Road. Its name was changed to Paton Congregational College in around 1921. In 1930 the college moved from Forest Road to a campus location at Tollerton Hall. Most of the building still stands today in use by the Nottingham Deaf Society and is a Grade II listed building.

From The Building News: “THE illustration on p. 412 represents the new Congregational Institute, Nottingham. The style of the structure is after the fourteenth century Gothic. The materials are red bricks, with stone-dressings. The inside of the building contains, on the ground-floor, a large entrance-hall, staircase, reception room, a large class-room, and library. The second story is occupied by the lecture-hall, which is a noble room, 6Oft. by 30ft., with open-timbered roof. The houses of the tutors arc situated at either end of the building, and are spacious and convenient. The front of the erection has been well broken up, and the Gothic windows, being doubly recessed, give the building a very substantial appearance. Bands of black bricks are carried, at intervals, along the brickwork, which considerably enhance the effect and beauty of the college. A well-proportioned porch stands out boldly at the entrance of the main building, and on the other side there are traceried windows, above which runs a band of ornamental brickwork, and above all are formed five upper windows. The centre of these is a large, three-lighted traceried window, running into a gable, which forms the central facade of the building. The high-pitched roof is surmounted by a bell-turret, of ornamental design, which lends much lightness and grace to thc structure, and greatly improves its general appearance. The site of the building is exceedingly well selected, and commands extensive and picturesque views of the surrounding country. Mr. E.C. Sutton, of Bromley House, Nottingham, is the architect.