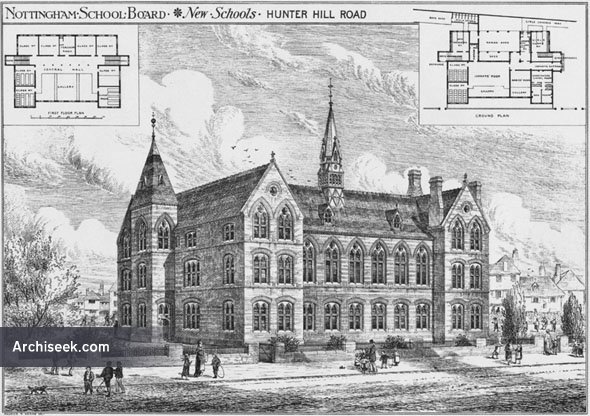 Published in The Building News, November 15th 1878. “The Nottingham School Board lately invited designs in competition for four new Board Schools, and in that of one to be erected in Hunter – hill – road, they stated that they desired to build the graded schools on the Prussian or classroom principle. The design which forms one of our illustrations was submitted in competition by Mr. R. C. Clarke, of Nottingham, with Mr. T. Roger Smith, of London, as consulting architect. It was prepared by these two gentlemen on the understanding that Mr. Roger Smith should be mainly responsible for the plan of the design .and Mr Clarke for the architectural treatment.

The design is based upon the commonly-accepted arrangement of school buildings in Prussia, as modified for the use of the School Board for London by Mr. Roger Smith in the large classroom school erected from his designs in Ben Jonson-street, Stepney. The main building, which is shown in our view and plan, forms a compact block of three stories in height. On the ground story is placed the infant school, together with a residence for the care-takers, and distinct entrances, staircases, cloak-rooms, and lavatories for the boys’ and girls’ schools. The first and second floors consist of class-rooms grouped round a central hall, and allotted to the different grades of the schools in proportion to their requirements. Teachers’ rooms are provided, and as the central hall equals both the stories of class-rooms in height, a gallery thrown from end to end is made use of to give access to the class-rooms on the upper floor. Great attention was paid to left-hand lighting and to access, supervision, ventilation, and those minutia; of arrangements upon which the success or failure of a school-house largely depends.”