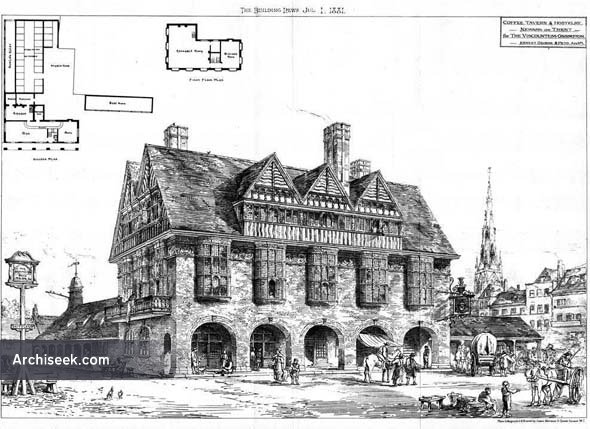 A conspicuous and imposing feature when entering Newark from the old Great North Road, founded by Viscountess Ossington, a daughter of the fourth Duke of Portland, in memory of her husband, Mr. Speaker Denison. It is a Temperance Hotel, with assembly rooms, and is administered by a body of public trustees, any profit resulting from its trade being devoted to the Newark Hospital. According to English Heritage, it is “the high-water mark of temperance architecture”.

“The coffee-tavern and hostelry shown in our illustration is to be built and endowed by Vis- countess Ossington, for the benefit of the town of Newark, and will be carried out from the designs of Messrs. Ernest George and Peto. The building is arcaded along the principal front in the manner of many old houses in Newark. The arcade will form a pleasant shelter in hot or wet weather, and tables can be placed here for those who like outdoor refreshment in the “cafe ” manner. There is also a large garden on the river-side of the tavern, over-looking the Trent, and its bridge (formerly a part of the town ramparts). This garden has an entrance from the bar, and here refreshments will be served, while music will be provided in summer evenings, after the custom of the pleasant German “Bier Garten.” Along one side of this garden is an alley for American bowls.

The ground-floor is occupied by a large bar, adjoining which, on the same floor, are the kitchen and offices. A smaller bar, scparate but served from the same counter, forms a room for boys, a feature found very necessary, both for the comfort of the men and boys. There is also a small manager’s parlour adjoining the bar. A separate entrance and staircase leads to a large assembly-room on the first floor, a room that will be used for concerts, lectures, and various large meetings, as well as for the farmers’ ordinary on market-days. On this first-floor are also a reading-room and a club-room, for the meetings of the various friendly societies. The second floor is formed in the spacious roof, where is provided a large billard-room for two tables. “Cubicles,” or dormitories, for twelve lodgers, as well as for the rooms for the manager and servants. A bath-room is provided for the use of the cubicles, and lavatories, &c., conveniently for billiard-room, assembly-room, and the yard.

There is also a ladies’ cloak-room. Externally the building is treated with an arcading of red brick, and above these arches the mullioned bay- windows project. The rear wide-spreading eave and cornices above, against which these bay-windows stop. Above are long mullioned windows, over which the gables are filled in with oak framing and panelling, giving a rich effect. The tenders will be opened in a few days for this work.” Published in The Building News, July 1 1881.

“The very dignified Coffee Tavern and Hostelry, Newark-on-Trent, is one of Mr. George’s public buildings that exhibits a most admirable combination of utility and beauty. One has but to contrast this with the hideously ornate average publichouses to see how admirably a genuine artist can give you, all and more in the way of comfort and fitness that they give, and at the same time add a distinctly beautiful building to the town.”