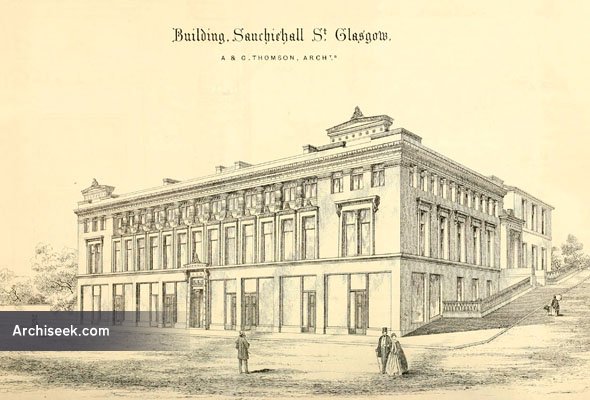 A three storey building, designed by Alexander ‘Greek’ Thomson,, constructed as commercial premises with shop space on the ground floor front. The facade was restored in the late 1980s, then in the late 1990s the building was restored and refitted by architects Page and Park. The building is A listed.

From The Building News, May 31 1872: “Owingto the rapid and steady westward extension of Glasgow, Sauchiehall-street has, in the memory of those still comparatively young, passed from being a quiet country road to be a busy thoroughfare, so that where but a few years ago the suburban villa was seen nestling snugly among shrubbery and trees, with green lawn and flower plots interspersed, are now to be seen long continuous ranges of tall buildings, the upper stories of which are divided off into commodious dwelling houses, after the Scotch method, and the street floor occupied as first-class shops, containing all conceivable commodities requisite for the comforts of those residing in the still rapidly extending west end. Hitherto, however, these remarks were true only of the south side of Sauchiehall-street, the north side, west of the Corporation Gallery Buildings, still remaining in the same condition in which it was forty or fifty years ago. “