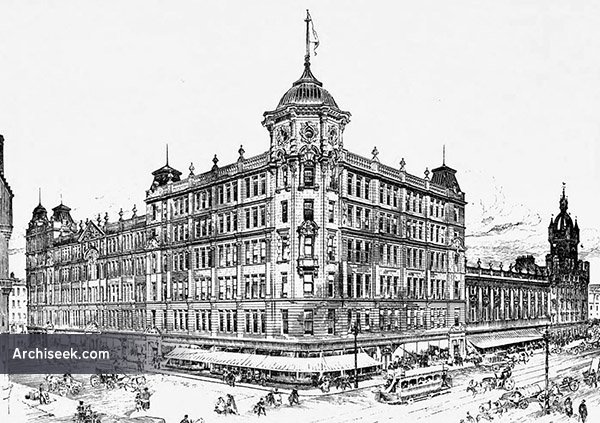 Not constructed as illustrated. “The site of this building was one of the many slum areas which the Improvements Trust of the City of Glasgow acquired for the purpose of pulling down and erecting new buildings and widening the thoroughfares of the city. Nelson-street was previously a very narrow street about 25 feet. wide, and was only available for foot traffic. It has been widened out to 50 feet and straightened, so that now it will form one of the principal streets in the centre of Glasgow. In most cases the properties rebuilt were of the dwelling-house class, but as this was a prominent and valuable site it was resolved to erect warehouses. The shops on the ground floor and the warehouses are being divided up to suit tenants. Messrs. J. Thomson and E D Sandilands are the architects. Published in TheBuilding News 16 September 1904.