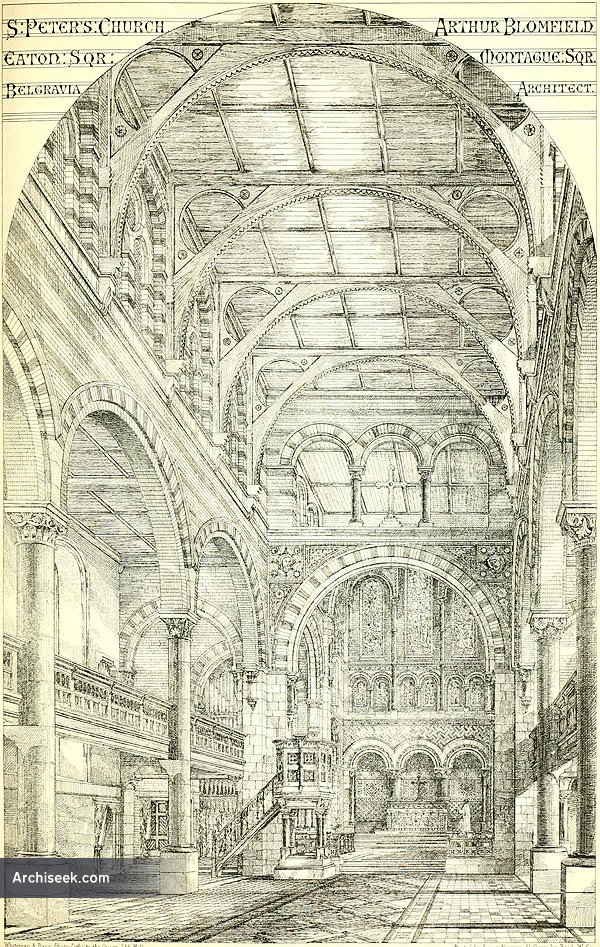 St. Peter’s was designed in a classical style by the architect Henry Hakewill, completed by 1827, and featured a six-columned Ionic portico and a clock tower. In 1874, the church was enlarged by Sir Arthur Blomfield, and reordered to provide a chancel at the east end, in the Romanesque style, although externally the changes remained faithful to the original classical style.

In 1987 an anti-Catholic arsonist set fire to the east end, in the mistaken belief that the Grade II listed building was a Roman Catholic church. Within hours the entire church was engulfed, and afterwards only the Georgian shell of the building remained. Part of the 1873 sanctuary which survived the fire can be seen, and also a side chapel now used as the vestry office, complete with stained glass.

Published in The Building News, July 3 1874: “Last year an addition was made to the east end of this church, consisting of a chancel with transepts, and an organ-chamber and two large vestries, with a strong room under the priests’ vestry. At the same time additional entrances and staircases were made at the east end of north and south aisles. All these works were carried out as part of a complete scheme for remodelling the interior of the church, which was in some respects inconvenient as well as unsightly. The architect felt that any attempt to alter the exterior would be a mistake, but that the interior, consisting simply of a large square room with galleries, had so little distinctive character, that he was at liberty to adopt any style or treatment which would produce the best and most dignified effect. The general features of the complete design will be gathered from the illustration. The exterior will remain unaltered. The new works at the east end were carried out by Messrs. Waller and Son, of Lyall-street, Belgrave-square.”