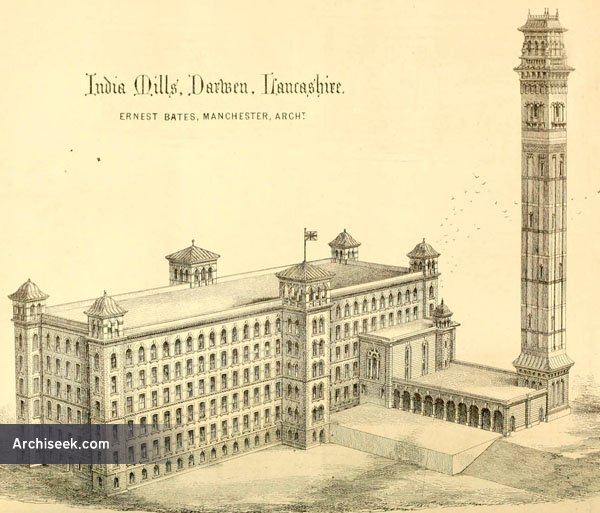 Eccles Shorrock & Co., cotton spinners, constructed this impressive building between 1859 and 1871, including the erection of a 303ft high Italian campanile chimney, and is now itself a Grade II* listed structure. The mill – and particularly the chimney – was a wonderful example of the flamboyant confidence of the Lancashire cotton industry in the middle of the 19th century, before the Lancashire Cotton Famine bankrupted some of the family-owned firms.

The towering smokestack of the Calico Printers Association at Middleton later took over as Lancashire’s tallest chinebt at 330ft but that was later dwarfed by Courtaulds 385ft “Preston Twins” at Redscar. Sadly, they have all been demolished, leaving the India Mill tower built of red brick decorated with bands of blue and yellow and local sandstone, standing tall as reminder of the milling heritage of Lancashire.

At its peak in the 1920s, the mill housed almost 100,000 mule and ring spindles and employed a significant workforce. The mill began to move towards spinning artificial fibres in 1933, became part of the William Baird Textile Group in 1954, was purchased in 1985 by Carrington Viyella, and closed in 1991.