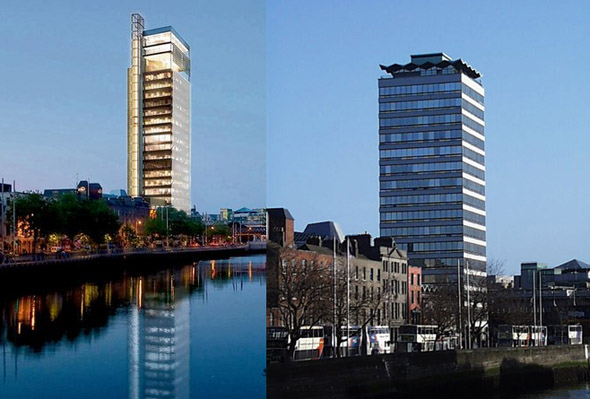 “It is considered that the site of Liberty Hall is of national historic and social significance and is located at a prominent and sensitive location fronting onto the River Liffey, within the historic city core of Dublin and adjacent to the Custom House, a protected structure of primary importance in the state. Having regard to policy SC18 of the planning authority, as set out in the Dublin City Development Plan 2011 – 2017, which seeks to protect and enhance the skyline of the inner city, inter alia, and notwithstanding the quality of the architectural design, it is considered that the scale and, in particular, the height of the development as proposed, would be unacceptably dominant in the city, would be visually intrusive in the streetscape and riverscape and would seriously injure the visual amenities of the city and its skyline. Furthermore, the proposed development would seriously detract from the setting and character of the Custom House, would intrude on the O’Connell Street and Grafton Street Architectural Conservation Areas, and other important vistas in the city. The proposed development would, therefore, be contrary to the proper planning and sustainable development of the area”.

It was SIPTU’s second proposal for the site, the union said it was in need of serious upgrading. Dublin City Council had previously granted permission for the development which would have been 35% higher than Liberty Hall, though it had included 19 conditions, including a realignment of some of the upper levels of the building. Irish Life Assurance plc, The Heritage Council and others had appealed the decision to An Bord Pleanála and this appeal has now been upheld.