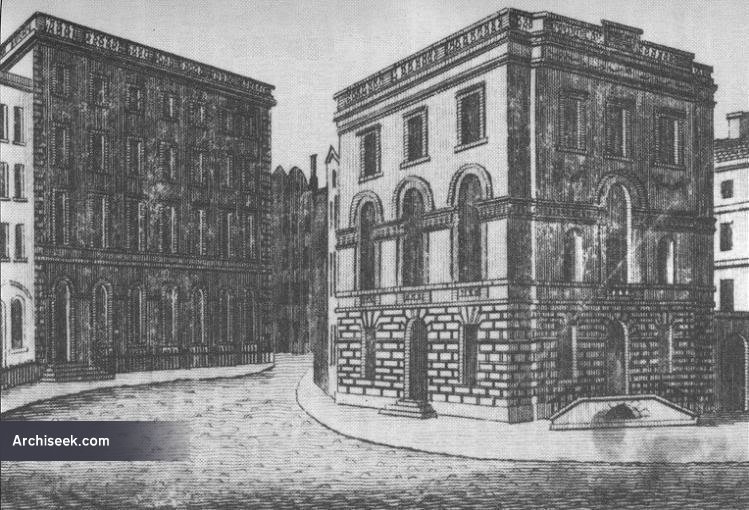 The La Touches were a Huguenots family from the Loire, who fled to Holland on the Revocation of the Edict of Nantes. They later moved to Ireland, becoming involved in the weaving trade and, ultimately, in banking. Founded in 1713, La Touche’s Bank traded for more than 170 years and was Dublin’s most successful 18th century bank. In 1783 the family was among the original stockholders when the Bank of Ireland was founded and a La Touche was its first Governor.

The bank is to the left in the illustration, facing across at the Newcomen Bank. Initially the building probably served both as mansion and as bank and was five bays wide. Single bay wings were added at the start of the 19th century by Sir Richard Morrison. The La Touche family sold the bank to the Munster Bank in 1870. The arcade of the former La Touche Bank, now forms a walkway in Dublin Castle’s conference centre. A plasterwork ceiling ‘Venus & Cupid’ ceiling, possibly by Barthelemy Cramillion was moved to the LaTouche Room in Bank of Ireland, College Green, in 1946.