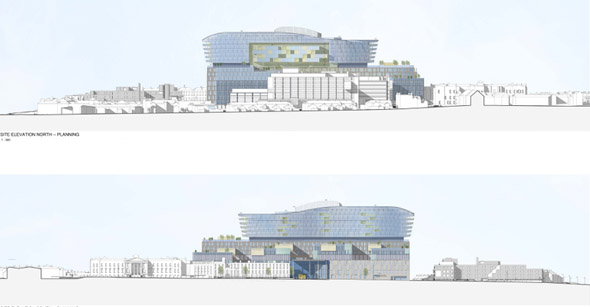 An Bord Pleanála has rejected the proposal for a new National Children’s Hospital on a site at the existing Mater Hospital on Dublin’s northside. The proposal, which “would have a profound negative impact on the appearance and visual amenity of the city skyline”, resulted in a building of “very significant” bulk and height, including a 164m-long ward block, rising to 74m above ground.

Notwithstanding its design quality, this would “adversely affect” the area and “seriously detract from the setting and character of protected structures, streetscapes and areas of conservation value and, in particular, the vistas of O’Connell Street and North Great George’s Street”.

According to An Tasice, “An Bord Pleanála has made one of the most significant planning decisions in its history in refusing the application by the National Paediatric Hospital Development Board for the 16 storey National Children’s Hospital adjoining the Mater Hospital in Eccles St. Were permission to be granted, it would “result in a dominant visually incongruous structure and would have a profound negative impact on the appearance and visual amenity of the city skyline”, including O’Connell St, according to the Board.”

Ian Lumley, Heritage Officer of An Taisce, stated “The decision supports An Taisce’s stance in protecting Dublin City and reflects a consistent pattern by An Bord Pleanála in refusing overscaled development in Dublin city centre over a long number of years. In effect, the Board is maintaining Dublin’s predominant low-rise character and its tourism cache, upon which so much revenue depends.”

The Board’s decision itself raises serious questions as to why a State-appointed board and its professional advisers wasted so much time and money in pursuing such an unsuitable development proposal.

The board which is now comprised of just four members (none of whom are architects), made its decision to refuse by three votes to one, in disagreement with senior planning inspector Una Crosse. Crosse who presided at an oral hearing last autumn, that the hospital would contravene Dublin City Council’s Phibsborough-Mountjoy Local Area Plan (LAP) or that the provision of off-street car parking on the site was inadequate.