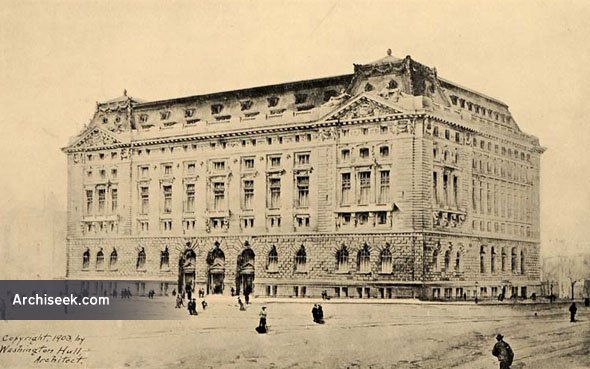 In 1903 Borough President J. Edward Swanstrom presided over an architectural competition for the commission of a new municipal building for the rapidly expanding Borough. This winning entry, by Washington Hull, was for a boldly detailed, eight-story Beaux-Arts structure with a double-height pitched roof and corner pavilions. Swanstrom‟s successor, Martin W. Littleton, subsequently rejected Hull‟s design and in 1905 commissioned the firm of McKim, Mead & White to create its own proposal. This was again rejected by the next holder of the office, and it wasn’t until 1924 that a building was completed by McKenzie, Voorhees & Gmelin (and they were originally commissioned in 1911).

Washington Hull, the winner of the original competition, sailed in a sloop from his home at Lawrence, Long Island, New York, on November 3, 1909 and was never heard of again. Funeral services without a body were held January 10, 1910.