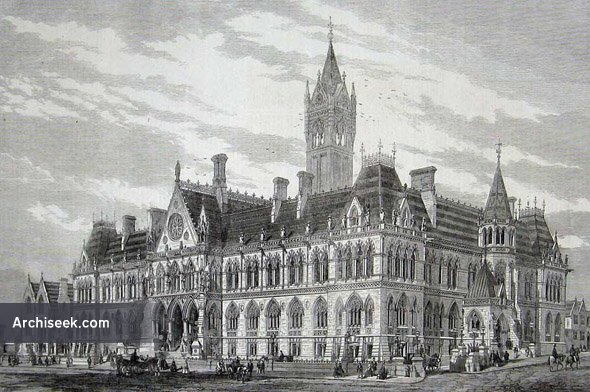 Designed by Alfred Waterhouse in the neo-Gothic style, construction began in 1859 and was completed in 1864. This was Waterhouse’s first major commission, won by open competition, and the nearby 1862 Strangeways Prison was also his design. Widely praised, the building was demolished beginning in 1957, due to incendiary bomb damage caused during World War 2. The building also contained exterior sculptures by Thomas Woolner and the firm of O’Shea and Whelan.

“CONSEQUENT on our recent visit to Manchester, we are afforded an opportunity of presenting our readers with a view and description of the important structure for courts of assize, at present in course of erection at Strangeways, in that city. Although the skeleton of the building is little better than half completed, a tolerably truthful idea may even now be formed of the beautiful and effective parts of the general design, and some of the elaborate cut stone details are already developed to great advantage.

Our engraving represents a perspective, embracing the principal front towards Gt. Ducie-street, and one of the flanks—viz., that nearest the city; but since its preparation some slight deviations have been made on each, which, however, do not materially affect the toute ensemble of the design, but chiefly the central portico, where a single gable spanning the projection is substituted for the three gables, as shown. For the appointment of architect to this building there was a very brisk competition, and numerous beautiful plans were submitted by local and other architects; however, “the day was gained” ultimately by a youthful and talented practitioner, Mr. Alfred Waterhouse, of Manchester, architect, under whose directions the building is now progressing. As may be perceived, the principal entrance is placed centrally, and is approached by a spacious and lofty flight of steps leading to a great hall—100 feet in length by 48 feet in width, and 80 feet in height-communicating with two courts for civil and criminal business respectively, and with ample corridors, off which are situated the various official departments, witnesses and refreshment rooms, &c. Immediately over the great entrance doorway is the grand jury assembly rooms, and the judges’ residences are comprehended in the group of buildings seen at extreme end, and connected by a screen with main structure. The internal decorations are handsome and appropriate, especially those of the great hall. Darley Dale stone—seemingly an excellent material—is employed for the main facings, but Dalbertrie grey granite is introduced for relief into the window shafts and other portions. Mr. S. Barnall, of Hulme, is the contractor, for about £70,000; and Mr. Littleer, the clerk of works, to whom we have to express our acknowledgments for courteously permitting us an in spection of the building, and for the particulars above given. It is expected that these courts will be open for business in the summer of 1863, and that some formality and eclai will accompany the inauguration.” The Irish Builder, April 1 1862.