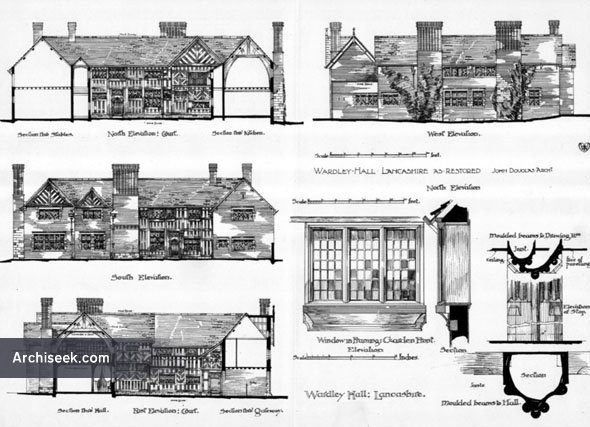 “THIS most interesting old Hall, which has recently been very carefully restored, was originally part of the inheritance of the Worsleys of Worsley. The Wardley estate passed to Thurstan Tildesley (a member of the family who were Lords of Tyldesley) by marriage with Margaret, daughter and heiress of Jordan Worsley, in the beginning of the 15th century, from the Tildesleys to the Sheringtons, from them to the Downes, who were probably a branch of the Cheshire family of that name, and who seem to have acquired the Wardley estates by purchase. Roger, the first of the Wardley Downes, died about 163S, and was succeeded by his son John, who married a daughter of Sir Cecil de Trafford, from whom he probably obtained the Barton portion of the property. By her he had two children, Roger and Penelope. Roger died without issue in the year 1675, leaving his sister sole heiress to his property. Miss Downes married Richard, third Earl Rivers, of Rock Savage, Cheshire. Their only daughter and heiress, Elizabeth, married the Earl of Barrymore. Lady Barrymore’s only child and heiress, Penelope, married the Hon. James Cholmondeley, second son of the Earl of Cholmondeley . By arrangement with her husband (from whom she was divorced n mensa et lliaro) she obtained power to dispose of the Lancashire estates, which belonged to her maternal grand- father. Earl Rivers. She sold the estates in 1760 to Francis, third and last Duke of Bridgewater, to the trustees of whose will they now belong. A peculiar interest has long been attached to the house on account of a human skull being kept there, as regards which there are several traditions.

It seems, however, that the true story is shortly as follows. The skull is that of a Benedictine monk, Dom Edward Ambrose Barlow, called Father Ambrose, fourth son of Sir Alexander Barlow, Kt., of Barlow Hall, near Manchester. He was born there in 1585. In or about 1617 he was sent from the English monastery at Douay to labour in his native country. He devoted his services almost exclusively to the southern parts of Lancashire, ministering chiefly in the secret chapels at the halls at Wardley, Worsley, and Morleys, the latter being the seat of the Tyldesleys. On Easter Sunday, April 25, 1011, he was preaching to his congregation in the domestic chapel at Morleys Hall, when the house was besieged by “a neighbouring minister” at the head of a fanatical mob. The priest was arrested and carried before a neighbouring Justice of the Peace named Risley ; by him he was sent under an escort of GO armed men to Lancaster, and at the next assizes was tried and condemned to death. On September 10 the martyr was drawn on a hurdle to the place of execution at Lancaster, and there hanged, cut down, butchered, and his quarters parboiled in the tar cauldron, as customary in such cases, in the fifty-fifth year of his age, and the twenty-fourth of his priesthood. His head, having been impaled either on the castle at Lancaster, or on the old church in Manchester, as was frequently done, was secretly secured by Mr. Francis Downes, and reverently presented in his mansion at Wardley. There it remains to this day, an object of wonder, and a speaking illustration of times now happily changed. It is about twenty years since Wardley Hall was last occupied, excepting only the portion now used as stables, which had been made into three cottages, and they were usually occupied by colliers, who worked at the great Bridgewater Collierv close by. Daring that period it has only been so far repaired from time to time as to be kept weather-proof, and it has suffered some damage on account of the coal-workings beneath it. In 1S94 it was decided to restore the house, with a view to it being used by one of the principal officials of the Bridgewater trustees, and, thanks to the interest taken in the matter by the Earl of Ellesmere, the proprietor of Worsley, no pains have been spared to carry out the restoration in as perfect a manner as possible. Messrs. Douglas and Fordham, architects, of Chester, were engaged to design the details of the work, and though it was necessary to rebuild some portion entirely, there is no appearance of newness about the place any- where, and the architects deserve much credit for the skilful and artistic manner in which they have dealt with a difficult problem. The work itself was done by the Bridgewater Trustees’ own workmen, under the direction of their engineer.” February 4, 1898.