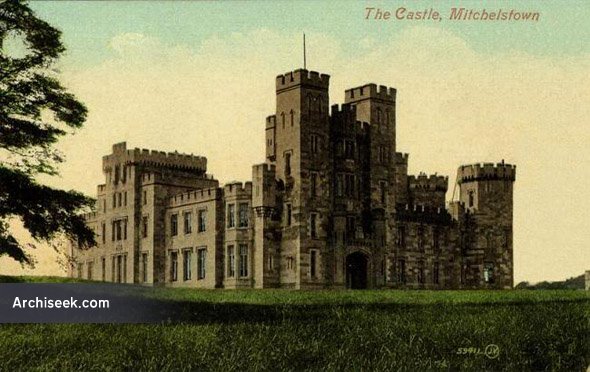 In 1823, after his succession to his title, George, 3rd Earl of Kingston, demolished the previous Palladian house and replaced it with a new castle designed by James and George Richard Pain. With 60 principal and 20 minor rooms, a 100-foot-long gallery, three libraries, morning room, dining room (which could seat 100 guests at one sitting), it was the largest neo-Gothic house in Ireland. Costing over £100,000 to build, it quickly inspired other major Irish castles such as Strancally Castle and Dromoland Castle.

Unfortunately, the 100,000 acre Mitchelstown Estate ran into considerable financial difficulties which, after the Great Famine of 1845-1851, forced its owners to sell 70,000 acres. Further difficulties arose as a result of internal family squabbling, legal disputes and the Land War of the 1880s.

Afterwards, the owner William Downes Webber sought compensation from the Irish Free State totalling £149,000 for rebuilding and £18,000 for contents. He intended to rebuild if sufficient compensation was provided. After his death in 1924, Colonel W.A. King-Harman pursued the claim in the Irish courts. Judge Kenny, in the Irish High Court in 1926, stated that the destruction of Mitchelstown Castle had been an act of wanton destruction which had no military purpose. He awarded £27,500 for the building and £18,000 for the contents.

As this wasn’t viewed as enough to rebuild the castle, the plan was dropped. The stones of Mitchelstown Castle were subsequently sold to the Cistercian monks of Mount Melleray Abbey, County Waterford, who used them to build a new abbey. In the 1940s, Mitchelstown Co-operative Agricultural Society built a milk processing factory on the site of the castle, which still operates today.

From: J.P. Neale, Views of the seats of Noblemen and Gentlemen in England, Wales, Scotland, and Ireland, Second Series, vol.II, London, 1825
“THE general appearance of this part of the county of Cork , is much enlivened by numerous Mansions, with plantations and cultivated scenery attached to them , the roads are also particularly good. This Castle is situated near the town of Mitchelstown, through which passes the road from Cork to Dublin, over the ridge of hills called the Kilworth Mountains. The Funcheon , a small stream , which flows through the Park , falls into the Blackwater.

Mitchelstown Castle was commenced by the present Nobleman, upon designs by James and George R. Pain, architects ; and has been com pleted in a style of building nationally adopted in England, about the time of King Edward I. Without the formality of a regular elevation or plan, the Mansion presents a magnificent appearance, and comprises every thing necessary for state or retirement; the nature of the ground on which it is built induced the adoption of this particular style, which harmonizes with the surrounding landscape, and gives a dignity to the scene ; classical architecture, which produces the best effect in more level situations, would fail of its importance on the Mitchelstown estate .

The ground plan of the Castle consists of a series of buildings en vironing three sides of a large court on the east, south , and west ; on the north is a terrace, with towers connected , by walls alone, to the main edifice. The entrance shown in our View is on the east, beneath an arch flanked by turrets, and bearing the arms and quarterings of the family over it, is called the White Knights Tower, in allusion to the family connexion with the House of Desmond; other towers at stated distances, with embrasures, and connected by buildings, the whole ofwhich are embattled, and built with stone from the estate , equal to marble in fineness, complete the general design ; the entrance is admirably contrived, opening upon a Hall twenty – three feet square, which conducts to a Gallery , ninety three feet in length by eighteen foet wide, this leads to the stair case at the extreme end of the Gallery. The south , which cosidered the principal front, is occupied in the centre by a library, forty six feet by thirty -two ; on the east end of this front, is the Drawing room , and a Morning room , and at the west angle of the Castle is the Dining-room , near the end of the Gallery.”