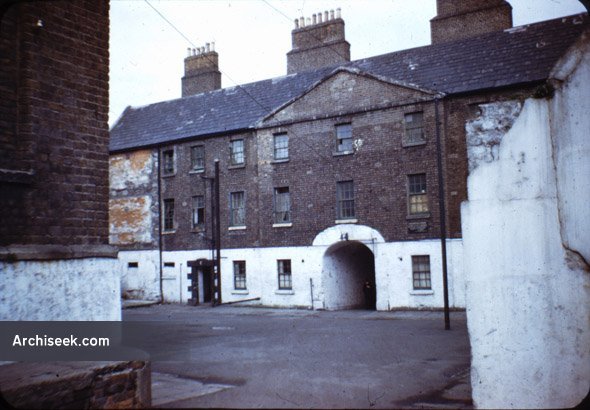 Built near the rear of Bridgefoot Street and Bonham Street to replace an earlier Marshalsea between Christ Church Cathedral amd Wood Quay. The Marshalsea was a debtors prison allowing debtors along with their families to take refuge from their creditors. The majority paid rent for their lodgings with the destitute being fed with bread. The building was laid out around two courtyards that housed the prisoners accommodation, guard rooms, a chapel and an infirmary. The Marshal of the prison had his own accommodation in the upper yard.

Described in ‘The New Picture of Dublin: Or, Stranger’s Guide Through the Irish Metropolis’, published in 1831, as: “The building is 180 feet by 120 divided into two court yards. In the upper is the house of the Marshal, apartments for his deputy, the tap guard room, and common ball over the latter of which are the prisoners rooms. In the lower court are a chapel, infirmary, ball court, common bath, and various necessary offices. A new yard of considerable extent has been added; an additional building has been erected where the poorer prisoners have apartments with beds and beddings, rent free; and in cases of extreme indigence they are supplied with bread.”

Described in 1837 by Lewis, “Prisoners under processes from the courts of justice and insolvent debtors are confined in the Four Courts Marshalsea, a large building in Marshalsea-lane, off Thomas-street: the prison has two court-yards, two chapels, several common halls and a ball-court.”

Robert Emmet used the Marshalsea as an arsenal while the Dublin Militia used it as a barracks in the later 19th century. During its use as a barracks, officers accommodation was added near the gate. After the withdrawal of the British from Ireland in 1922, the city took over and used it as a tenement until 1970 or so. It was finally demolished in 1975. Part of the external walls still exists.

Photographs by Sean McDonnell, and courtesy of Ronan McDonnell at http://theinquisition.eu/