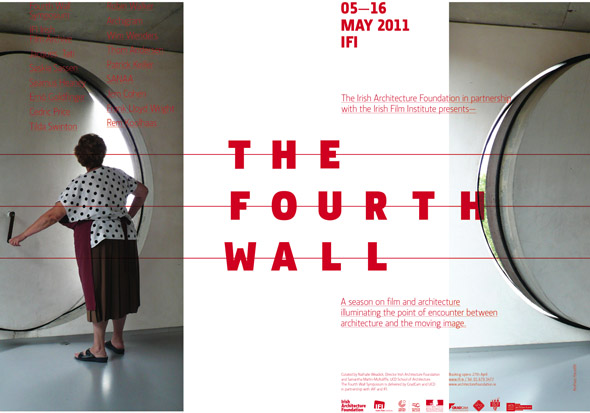 The Fourth Wall reveals architecture as both protagonist and active participant within the fabric of filmmaking. It also harnesses the immersive and narrative capabilities of film. Rather than seeing the medium as a purely documentary tool, we are prompted to consider how film can unveil the intrinsic, even elusive, qualities of buildings and their settings. By attending to the richness of architectural place and space, this series asks questions and challenges preconceptions about how we inhabit architecture, both temporally and spiritually, as well as through memory and fiction. Many of the films in this series have never before been shown in Ireland. In addition, there will be a specially curated selection of footage from the IFI Irish Film Archive, and a symposium organised by GradCAM (Graduate School of Creative Arts and Media) in collaboration with UCD, IAF and the IFI. The Fourth Wall is presented with the support of the French Embassy in Ireland, the Goethe-Institut Irland, UCD and NCAD/GradCAM.

Curated by Nathalie Weadick, Director of the Irish Architecture Foundation, and Samantha Martin-McAuliffe, UCD School of Architecture, this collaboration explores and illuminates the point of encounter between architecture and the moving image. Running from 5th May-16th May at the Irish Film Institute.